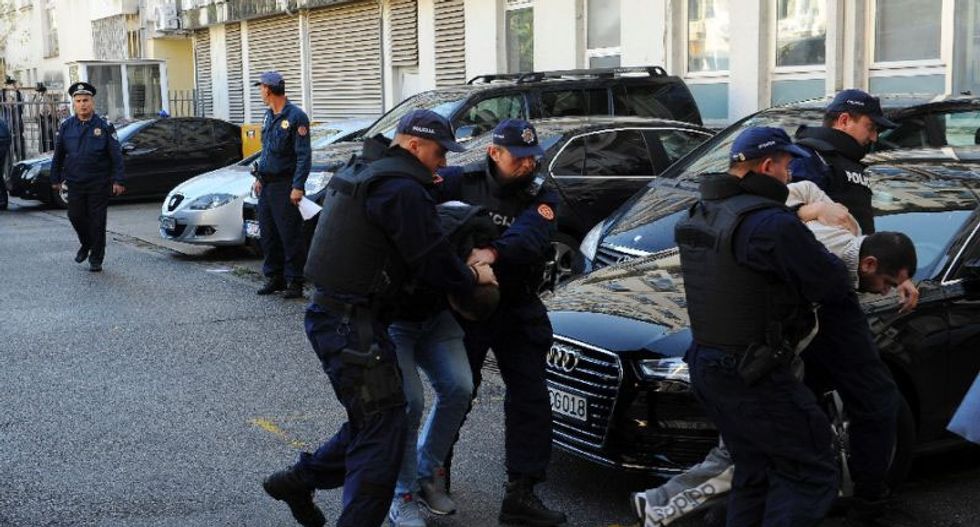 Men are escorted by Montenegrin police officers to the special court in Podgorica on October 16, 2016 (AFP Photo/SAVO PRELEVIC )

The White House ratcheted up its criticism of Russia on Wednesday, pointedly saying it had seen credible reports that Moscow backed an election-day attack in Montenegro last year.

A senior administration official -- speaking as Secretary of State Rex Tillerson was in Moscow for difficult talks on Syria -- pointed the finger of blame at Russia for an alleged coup attempt during October's election.

"We are very concerned about Russian interference in the October elections in Montenegro," the official said, "including credible reports of Russian support for an attempted election-day attack on the government."

A special prosecutor in Montenegro has accused Russian state bodies and the pro-Russian Democratic Front (DF) party of trying to overthrow the government, in an effort to prevent Montenegro from entering NATO.

Andrija Mandic, who is one of DF's two leaders and is among 25 people accused by the prosecutor, told AFP in March that the case was "a staged political process" to discredit him and his party. Mandic is a fierce opponent of his country's looming NATO accession.

A dozen of the accused were sentenced to several months' imprisonment after reaching a deal with the prosecutor.

Prominent Montenegrin lawyer Branislav Lutovac, who said the case was "full of contradictions," told AFP last month that these were "light sentences for serious crimes".

Wednesday's US comments came a day after President Donald Trump approved Montenegro's NATO accession and prepared to meet the alliance's Secretary General Jens Stoltenberg at the White House later in the day.

Under Russian President Vladimir Putin, the Kremlin has long seen the Balkans as within its "sphere of influence".

Despite initial hopes in Moscow of better ties with Washington under Trump, the US new president has tempered his praise of Putin, most recently condemning his support for Syria's Bashar al-Assad.

Trump's harder line comes amid growing questions about whether his aides and associates colluded with alleged Russian meddling in the US election. That line of inquiry has focused on Trump allies Carter Page, Paul Manafort and Roger Stone.

Contested by a significant part of the predominantly Orthodox Slav population of Montenegro, the choice of former prime minister Milo Djukanovic to integrate it into NATO triggered protests in 2015 that turned violent.

Many fear that the demonstrations could resume when the parliament meets soon to ratify the accession.