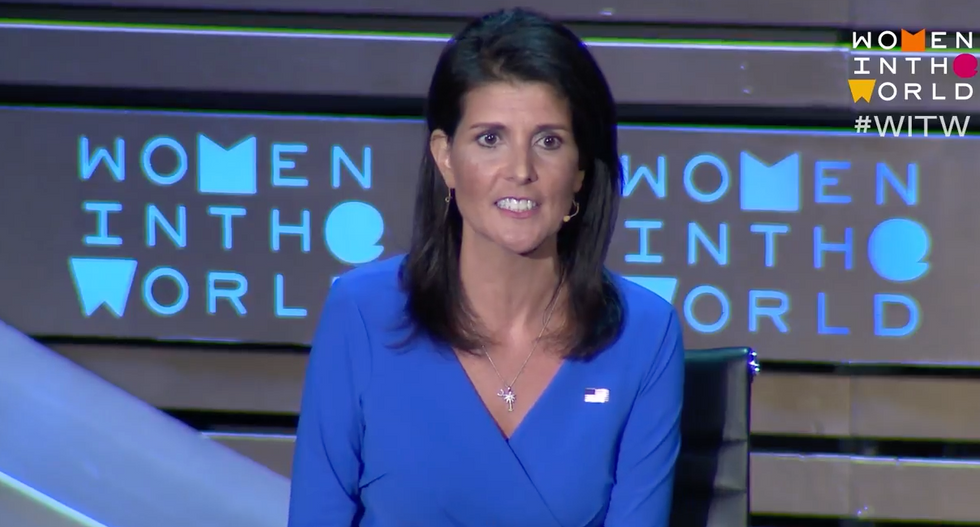 U.S. Ambassador to the United Nations drew boos from an audience on Wednesday after insisting Donald Trump’s actions prove he sees Russia as a problem.

MSNBC’s Greta van Susteren on Wednesday grilled Haley over the president’s refusal to list Russia as a problem. The pair were speaking at the “Women in the World” summit in New York City.

“We have not heard much from him about Russia,” van Susteren said of Trump. “Why?” The question drew applause from the audience.

“I think, first of all—keep in mind I work for the Trump administration,” Haley began. “And if you haven’t heard me talk about Russia—I have hit Russia over the head more times than I can count.”

The question came hours after Haley garnered national headlines, delivering an impassioned speech at the U.N. condemning the gas attacks in Syria, and imploring Russia to flex its influence over the crisis.

“How many more children have to die before Russia cares?” Haley asked during that speech. But despite the ambassador’s tough talk, Trump has yet to personally call out the Kremlin’s role in the Syrian conflict.

At the “Women in the World” summit, Haley tried to insist it’s Trump’s actions, not words, that show he’s tough on Russia.

“The two things that Russia doesn’t want to see the U.S. do is strengthen their military and expand energy, and the president has done both of those,” she concluded.

Watch the video below, via Women in the World. Van Susteren’s question begins around the 3:10 mark: