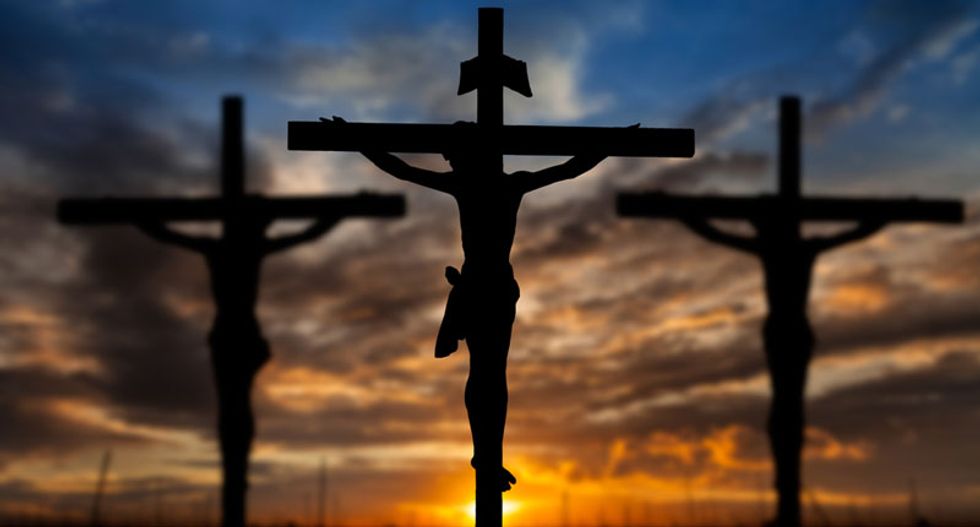 Silhouette of Jesus during his crucifixion (Shutterstock)

Jesus’s crucifixion is probably one of the most familiar images to emerge from Christianity. Good Friday, one of the holiest days in the Christian calendar, marks the event. But what was crucifixion? And why was Jesus killed that way?

Crucifixion was a Roman method of punishment. Suspended from a large cross, a victim would eventually die from asphyxiation or exhaustion – it was long, drawn-out, and painful. It was used to publicly humiliate slaves and criminals (not always to kill them), and as an execution method was usually reserved for individuals of very low status or those whose crime was against the state. This is the reason given in the Gospels for Jesus’s crucifixion: as King of the Jews, Jesus challenged Roman imperial supremacy (Matt 27:37; Mark 15:26; Luke 23:38; John 19:19–22).

Crucifixion could be carried out in a number of ways. In Christian tradition, nailing the limbs to the wood of the cross is assumed, with debate centring on whether nails would pierce hands or the more structurally sound wrists. But Romans did not always nail crucifixion victims to their crosses, and instead sometimes tied them in place with rope. In fact, the only archaeological evidence for the practice of nailing crucifixion victims is an ankle bone from the tomb of Jehohanan, a man executed in the first century CE.

So was Jesus nailed to the cross?

Some early Gospels, such as the Gospel of Thomas, don’t include the narrative of Jesus’s crucifixion, choosing instead to focus on his teaching. But Jesus’s death by crucifixion is one of the things that all four canonical Gospels agree on. Matthew, Mark, Luke, and John, all include the crucifixion event in their own slightly different ways.

None of the Gospels in the New Testament mentions whether Jesus was nailed or tied to the cross. However, the Gospel of John reports wounds in the risen Jesus’s hands. It is this passage, perhaps, that has led to the overwhelming tradition that Jesus’s hands and feet were nailed to the cross, rather than tied to it.

The Gospel of Peter, a non-canonical gospel from the first or second century CE, specifically describes in verse 21 how after Jesus had died, the nails were removed from his hands. The Gospel of Peter also famously includes the cross itself as an active character in the Passion narrative. In verses 41-42 the cross speaks, responding with its own voice to God: “And they were hearing a voice from the heavens saying, ‘Have you made proclamation to the fallen-asleep?’ And an obeisance was heard from the cross, ‘Yes.’” Tradition is clearly of paramount importance to this text.

Over the past few years, several people have claimed to have found the actual nails with which Jesus was crucified. Each time, biblical scholars and archaeologists have rightly pointed out the assumptions and misinterpretations of evidence behind these claims. Curiously, this fixation on the nails persists, despite the fact that the earliest gospels make no mention of Jesus being nailed to the cross.

Depictions of the crucifixion

It isn’t surprising that Christians took a while to embrace the image of Christ on the cross, given that crucifixion was a humiliating way to die. What is surprising is what the earliest image of the crucifixion turns out to be. Rather than the devotional icons with which we are familiar – pictures that glorify Jesus’s death – this earliest image appears to be some late second-century graffiti mocking Christians.

Called the Alexamenos Graffito, the image shows a figure with the head of a donkey on a cross with the words: “Alexamenos worships his God.” This was apparently a common accusation in antiquity, as Minucius Felix(Octavius 9.3; 28.7) and Tertullian (Apology 16.12) both attest. Since the graffito was clearly not made by a Christian, this image suggests that non-Christians were familiar with some core elements of Christian belief as early as the second century.

Gemstones, some used for magical purposes, also provide some of our earliest depictions of the crucified Jesus. This second or third century piece of carved jasper depicts a man on a cross surrounded by magic words.

Another very early image of the crucifixion is found carved into the face of a carnelian gemstone made into a ring.

Scholars think that the Constanza gemstone, as it is known, dates from the fourth century CE. In this depiction, Jesus’s hands do not appear to be nailed to the cross, since they fall naturally, as if he is tied at the wrists.

Since the evidence from antiquity doesn’t provide a clear answer as to whether Jesus was nailed or tied to his cross, it’s tradition that dictates this common depiction. Those who have seen the film The Passion of the Christ will recall how much time the director, Mel Gibson, devoted just to the act of nailing Jesus onto the cross —- almost five whole minutes.

Given the relative silence on the act of crucifixion in the Gospels, this stands out as a graphic expansion. One of the only films that does not assume that crucifixion involved nails is Monty Python’s Life of Brian, which shows multiple crucifixion victims, though not Jesus, tied to their crosses.

Eventually, Emperor Constantine put an end to crucifixion as a method of execution, not for ethical reasons, but out of respect for Jesus. But in the end, it is the enduring image of the cross, and not the matter of whether nails or ropes were used, that most firmly evokes the death of Jesus in art and tradition.