Chelsea Handler: Melania would be an 'American hero' if she divorced Trump and spilled his 'dirty secrets' 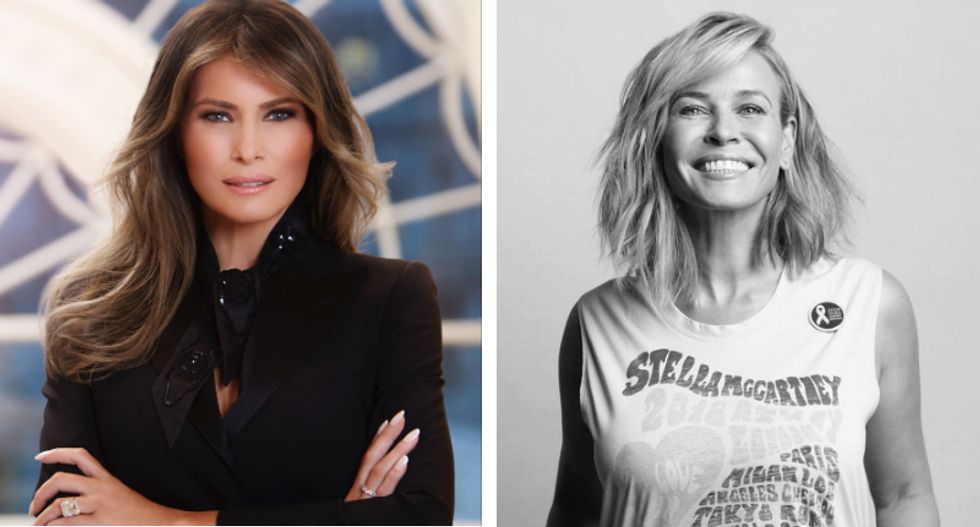 Picture of First Lady Melania Trump via the White House. Picture of comedian Chelsea Handler via her Facebook.

Chelsea Handler, star of the Chelsea show on Netflix, took the opportunity to discuss the state of the first couple's marriage.

"That hand thing was great," the comedian told the audience.

Handler than proceeded to tell the audience her hopes for the First Lady.

"I have a fantasy, I want Melania just to finally just come out, divorce him," Handler explained. "She would be an American hero, we would embrace her if she just said, 'listen, this guy's disgusting and I know all of his dirty secrets and I'm willing to tell everybody.'"

The panel then had a discussion about the rumors that Melania had been planning to divorce Donald Trump if he didn't win the race.

Earlier in the interview, Handler recommended laughter as a cure for the fantastical news coming out of Donald Trump's White House.

"I know it's a very scary and dangerous time, but you have to just take as much enjoyment out of it as you possibly can," Handler prescribed. "It is really entertaining and it's like a great reality show every single day."

Whoopie Goldberg replied, "it's the craziest thing I think anybody has seen."

"Just when you think it can't get any worse, it does," Handler worried. "I don't know, I mean I really don't know, every time I think it's the end, it's not."

No US President has ever gone through a divorce while in office.

Only one president has ever been a divorcee. President Ronald Reagan was the third husband of Academy Award winning actress Jane Wyman during the 1940s. They divorced in 1949 and Reagan married Nancy Davis in 1952.