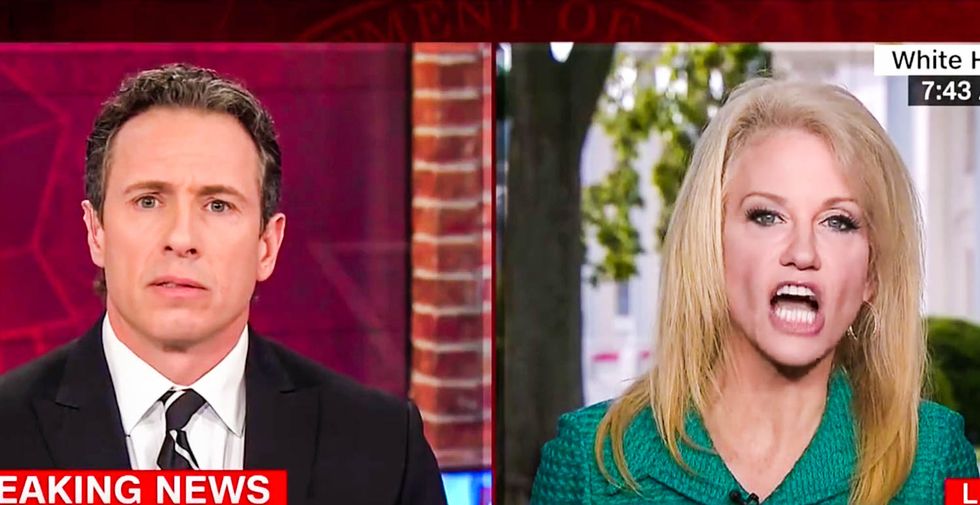 CNN's Chris Cuomo got into a heated discussion with Trump adviser Kellyanne Conway on Wednesday morning, in which Conway chastised Cuomo for questioning the timing of President Donald Trump's decision to fire FBI Director James Comey.

During the interview, Cuomo pointed out that it didn't make any sense for the president to fire Comey over his handling of the Clinton email investigation right now, when he could have done so when he first came into office back in January.

Conway then lashed out at Cuomo and told him it was not right for him to question the timing of Trump's decisions.

"Why is the timing up to you at CNN?" Conway asked.

"It's just a question," Cuomo responded.

"If the president had done it in January, you guys would have run the same chyron for three months that he did it in January because he's got something to hide!" she shot back.

Cuomo pointed out that it took Trump under two weeks to decide to fire Comey -- despite the fact that it took him longer to fire former National Security Adviser Michael Flynn after his administration had been informed by former acting attorney Sally Yates that Flynn had likely been compromised by the Russian government.

"It took him two weeks, all right?" Cuomo said. "Why move on it so quickly? Why do it now?"

"Okay, let me ask you the question: Why not?" Conway responded. "Is it too quick for people?"

"Because you're being investigated by the FBI!" Cuomo said.

Later in the interview, Conway said that Cuomo and the media shouldn't even be questioning the timing of any of the president's decisions.

"The President of the United States confers with his team on any number of personnel decisions," she said. "You want to question the timing of when he hires, when he fires -- it's inappropriate."