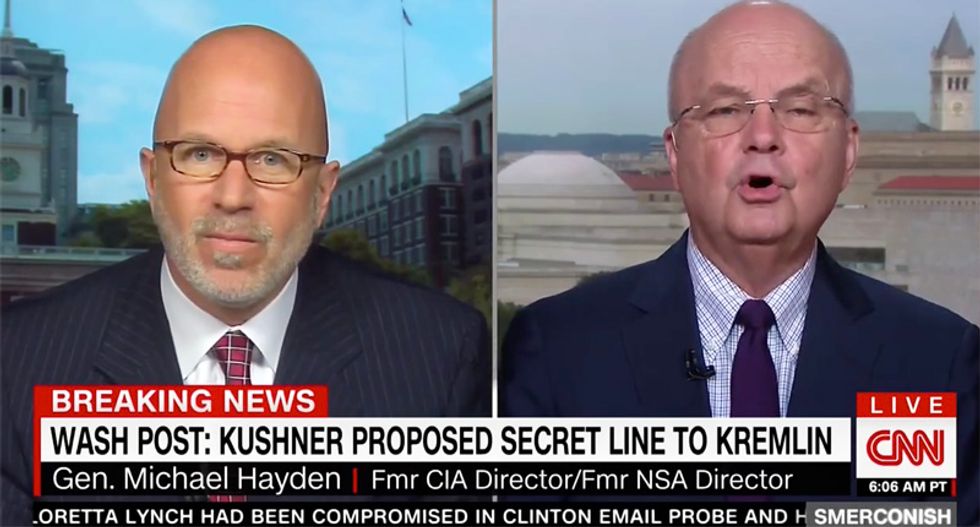 Appearing on CNN Saturday morning, former CIA head and NSA director Michael Hayden blistered President Donald Trump's son-in-law, Jared Kushner, for blithely thinking he could set up a back-channel communication system with the Kremlin and not be caught.

Appearing with host Michael Smerconish, Hayden was incredulous over the bombshell Washington Post report that Kushner proposed using Russian technology in foreign establishments to speak with the Russians while working on the Trump presidential transition.

According to Smerconish, "intercepts of Russian communications reviewed by U.S. officials, Russian Ambassador Sergey Kislyak told his superiors in Moscow that Kushner made the proposal during a meeting December 1st or 2nd at Trump Tower. Also at the meeting, Michael Flynn at the time about to be Trump's national security adviser."

Smerconish added, "General Hayden, is this nefarious or naivete?"

"Right now, I'm going with naivete. That's not particularly comforting for me," Hayden replied. "What manner of ignorance, chaos, hubris, suspicion, contempt, would you have to have to think that doing this with the Russian ambassador was a good or appropriate idea."

"Some read this as another sign of potential collusion," Smerconish suggested. "A more benign explanation is the idea the incoming Trump Administration felt they couldn't trust the Obama Administration, the intel community or both, and therefore thought they had to go this direction."

"Yeah. that's one of the points i was trying to raise a second ago, Michael," Hayden shot back. "What degree of suspicion of the existing government, what degree of contempt for the administration they were replacing, would be required. again, to think this was acceptable course of action. It says an awful lot about the campaign, Michael. It says an awful lot about us as a society, that we could actually harbor those kinds of feelings that the organs of the state would be used by my predecessor to come after me or to intercept my communications or to disrupt my administration in a way that made it seem legitimate to me to use the secure communications facilities of a foreign power."

"And oh, by the way, a foreign power that some in government alleged you are cooperating with to affect the American election," Hayden concluded.