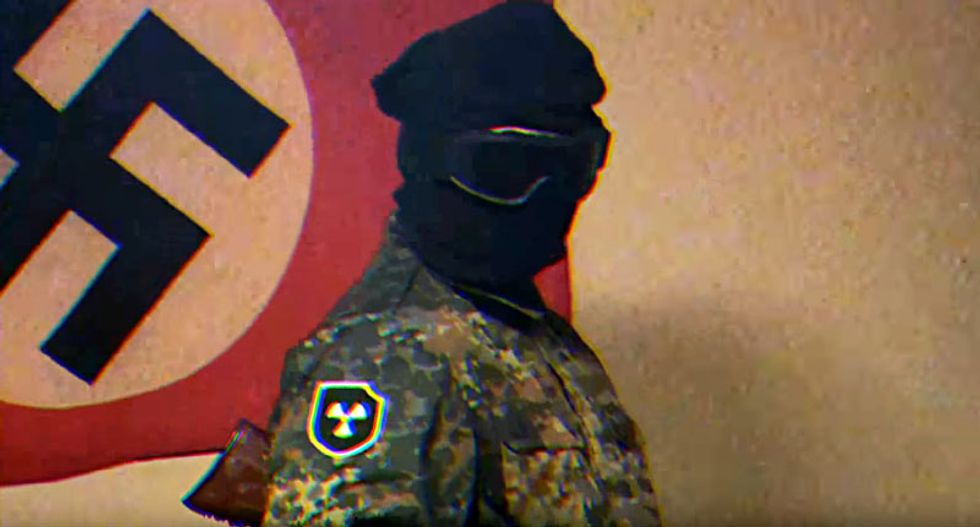 A masked member of neo-Nazi group "Atomwaffen" (via screencap).

Shortly after news broke that Devon Arthurs, an 18-year-old Muslim convert and former white supremacist, killed two of his friends for attacking his new faith, more details have been revealed surrounding the murders.

According to the Miami Herald, Brandon Russell, Arthurs' roommate, was in possession of multiple materials meant to build explosives, including a lethal bomb-making chemical named hexamethane triperoxide diamine. FBI and Tampa Police Department officers found the materials in Russell's garage.

Russell was arrested on May 21 during a traffic stop in Key Largo, and police have not yet revealed why he was pulled over or what he was doing in the Florida Keys.

While in Russell's bedroom, devices used by police bomb technicians alerted to the presence of radiation sources — thorium and americium.

Russell returned home from National Guard duty on May 19 to find that Arthurs had killed their friends. It's unclear whether the bomb was intended for Arthurs' or for another person or group.

Russell is an admitted "national socialist," the name of the Adolf Hitler's party that was soon shortened to "Nazi" during the lead-up to World War II.

The Herald also reports that Russell is a member of a group called “Atomwaffen” (meaning “atomic weapon” in German.) The group has been promoted by the white supremacist Daily Stormer website since last year. The racist site praised the group for holding a protest during “a homo vigil for the victims of the Orlando nightclub shooting.”

In January, RadarOnline reported that the group's leader was a nuclear physics student who was "trying to encourage members to conduct an attack similar to Timothy McVeigh‘s strike in Oklahoma City."

Police reportedly found a framed photo of Oklahoma City bomber Timothy McVeigh in Russell's bedroom. It is believed that he learned to manufacture explosives while at the University of South Florida, where he was a member of the engineering club.

According to the Chicago Maroon, the Atomwaffen Division group has described itself as a “very fanatical, ideological band of comrades who do both activism and militant training. Hand to hand, arms training, and various other forms of training. As for activism, we spread awareness in the real world through unconventional means.”