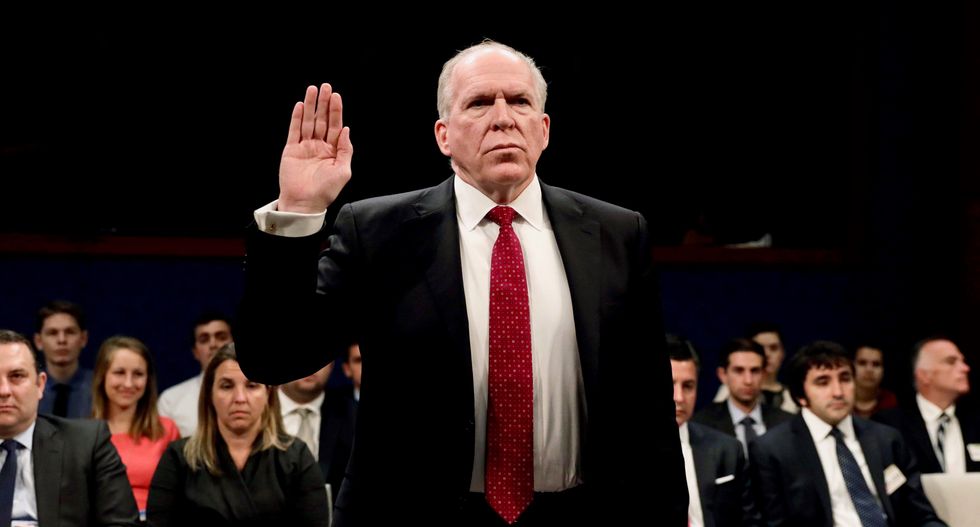 Former CIA director John Brennan is sworn in to testify before the House Intelligence Committee to take questions on “Russian active measures during the 2016 election campaign” in the U.S. Capitol in Washington, U.S., May 23, 2017. REUTERS/Kevin Lamarque

Former CIA Director John Brennan said on Tuesday it became clear last summer that Russia was attempting to interfere in the U.S. presidential election, and that he warned the head of Russia's FSB security service that such interference would hurt U.S. ties.

"It should be clear to everyone Russia brazenly interfered in our 2016 presidential election process and that they undertook these activities despite our strong protests and explicit warning that they do not do so," Brennan testified at a hearing of the U.S. House of Representatives Intelligence Committee.

Brennan said he believed he was the first U.S. official to raise the matter of election interference with the Russians, citing a meeting he had on Aug. 4 last year with FSB head Alexander Bortnikov.

He said he raised published media reports of Russian attempts to meddle in the election with the Russian official, who denied any involvement by Moscow.

Brennan said he briefed then President Barack Obama and other top officials, and that he discussed the matter with both Republican and Democratic U.S. congressional leaders in August and September.

U.S. intelligence agencies concluded in January that Moscow tried to tilt the November presidential election campaign in Republican Donald Trump's favor, including by hacking into and leaking the emails of senior Democrats. Moscow has always denied the allegation.

The early months of Trump's presidency have been clouded by FBI and congressional probes into Russian meddling and possible collusion by Trump's campaign. Trump has denied any collusion.