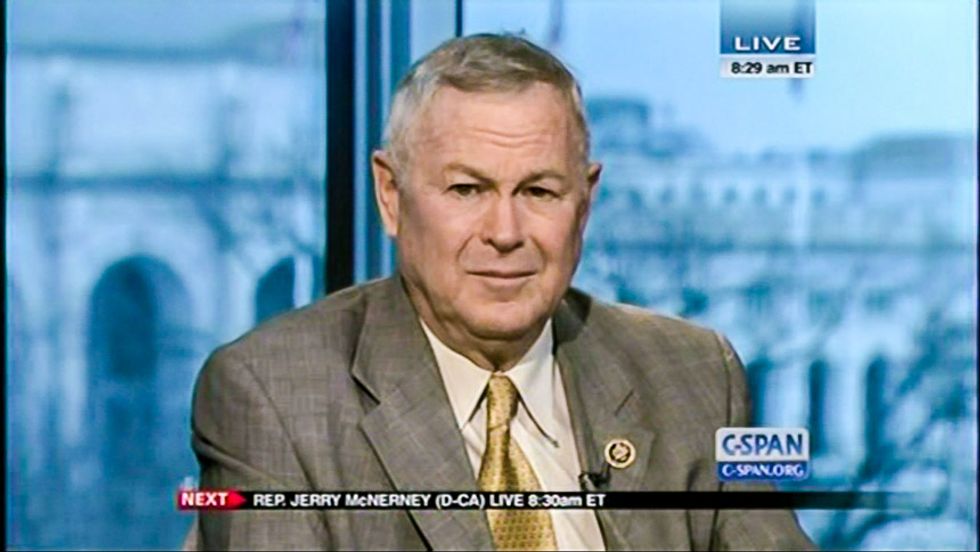 A Republican congressman identified, along with President Donald Trump, by another GOP lawmaker as the possible beneficiary of Putin payoffs was warned by the FBI that he was targeted for recruitment by Russian spies.

Rep. Dana Rohrabacher (R-CA) was taken to a secure room at the Capitol in 2012 and warned by an FBI agent that Russian spies were trying to cultivate him as an "agent of influence" to help shape policies to favor Kremlin interests, reported the New York Times.

The revelation comes after the Washington Post reported on a recording of Rep. Kevin McCarthy (R-CA), the House majority leader, telling GOP colleagues on June 15 that he believed Russian President Vladimir Putin had paid Trump and Rohrabacher.

House Speaker Paul Ryan can be heard on the recording urging his fellow Republicans not to leak details of their conversation.

Both lawmakers denied the comments until reporters told them about the recording, and McCarthy now claims his remarks were intended as a joke.

Rohrabacher has long been known as one of Russia's most vocal defenders in Washington, and he's now one of Trump's biggest allies on Capitol Hill.

The Orange County Republican told the Times that his meeting with the FBI agent covered his contact with one member of the Russian Foreign Ministry he had met on a trip to Moscow.

"They were telling me he had something to do with some kind of Russian intelligence," Rohrabacher told the newspaper.

Law enforcement officials said they did not believe Rohrabacher was actively working with Russian intelligence, but they think he was targeted as an unwitting pawn.

Officials said they found no evidence that Rohrabacher had ever been paid by the Russians.

Two other lawmakers -- Rep. Mike Rogers (R-MI) and Rep. Dutch Ruppersberger (D-MD), who were then senior members of the House Intelligence Committee -- were also at the 2012 meeting with Rohrabacher, the newspaper reported.

Ruppersberger told the Times that he recalled the meeting with Rogers and Rohrabacher, but he didn't remember an FBI agent being present.

The Maryland Democrat reminded Rohrabacher that "Russia is our adversary," but the California Republican said he understood that.

"Any time you meet a Russian member of their Foreign Ministry or the Russian government, you assume those people have something to do with Russian intelligence," he said.

Rohrabacher has dismissed concerns that Russia interfered in the U.S. election on behalf of Trump, who has made similar claims.

"Did they try to influence our election? We have tried to influence their elections, and everybody’s elections," Rohrabacher said in March. "The American people are being fed information that would lead them to believe that we need to be in a warlike stance when it comes to Russia."

Rohrabacher is facing what could be the toughest re-election campaign in his 28-year career against well-funded Democrat Harley Rouda.