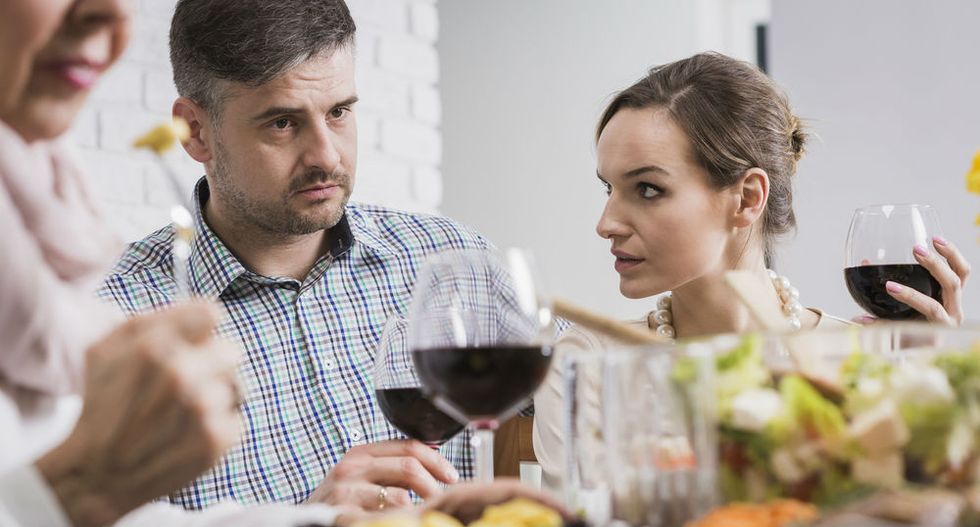 Two people arguing over a dinner table (via Shutterstock).

Memorial Day -- a time to celebrate American veterans, get families together, and, as per all large familial gatherings, argue about politics.

With more politics to argue about than ever before, and more alienation between left and right news camps, the least you can hope for is to head off your Rush Limbaugh-listening uncle's insistence on talking about the DNC murder conspiracy by debunking viral "fake news" stories.

This article by the journalist-focused Nieman Lab project is meant to help reporters debunk fake news, but it operates well as a guide for anyone looking to tell what's real reporting and what's false clickbait this holiday season.

Know the difference between fake news and bad journalism.

In a Quartz article published earlier this month, writer Ashley Rodriguez makes the argument that "fake news" and bad journalism are often conflated -- especially in the mind of President Donald Trump, who "uses 'fake news' to describe outlets such as the New York Times and CNN, which publish stories he says are inaccurate. But even if his claims have a basis, what he’s describing is not 'fake news'—it’s mistakes, bias, or other forms of bad journalism."

There's poorly-fact checked news or biased news that one doesn't like (such as much of the reporting the president refers to as "fake news"), and then there's deliberate falsehoods masquerading as news, such as the Pizzagate conspiracy or, more recently, the debunked conspiracy theories surrounding the death of DNC staffer Seth Rich that has been plugged by the likes of Sean Hannity and Trump confidante Roger Stone.

Knowing and outlining this distinction is an excellent first step when attempting to argue with family members who insist that "Russia collusion is just fake news" -- especially when so many government officials have provided evidence of their own accord.

Speak the language of fake news in order to debunk it.

As we've learned with Pizzagate and the more-recent DNC murder conspiracy theories, much of the pressure behind the viral spread of fake news comes from the Breitbart-loving alt-right. Nieman Lab and others have suggested one of the most effective ways of combating the alt-right and the phony stories they push out is by learning their language. A new report in The Guardian gives a primer on the ways the alt-right "disrupts" media, and Nieman Lab plugged the excellent Ctrl Alt Right Delete newsletter as great jumping-off points to learn how to speak the same language as your Reddit-loving younger cousin -- or your Fox News-watching aunt who believes the stuff the alt-right creates once it reaches her media bubble.

Use Seth Rich as a case study.

With the newly-reinvigorated conspiracy theories about former DNC staffer Seth Rich's murder, we have real-time evidence of what makes a viral fake news story tick. A recent look into the timeline and the bizarre specifics of the Rich conspiracy appeared in a New York Times column this week, and knowing the background on this newsworthy piece of fake news could do wonders around your family's dinner table.

Learn the format of a fake news story.

Yesterday, a stunning report was released by the Canadian-based Citizen Lab think tank that provides exhaustively-researched evidence as to how the fake news used by Russians to tamper with the American and French elections were created. The biggest takeaway -- that "leakers" of falsified or tampered-with documents often hide kernels of lies within facts, which Citizen Lab's John Scott-Railton refers to as "falsehoods in a forest of facts". You don't have to read the entire report (unless you have a long drive or flight and are interested) to get the gist that fake news relies on one small lie surrounded by truths to make them harder to discredit. If you can get to that kernel in whatever fake news your family member (or Facebook friends) spew, you can begin to unravel the whole thing.