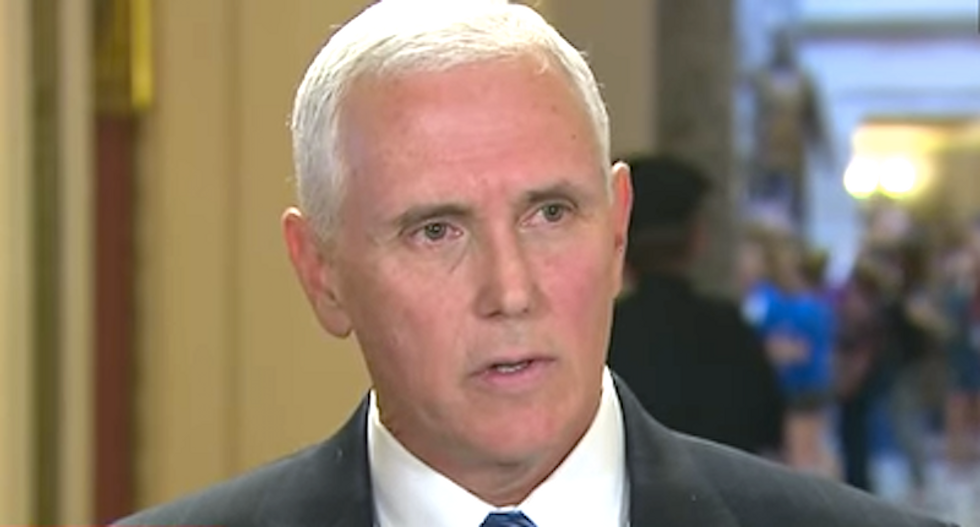 The vice president told CNN that Deputy Attorney General Rod Rosenstein brought his recommendation to fire Comey to the president, who decided to act quickly Tuesday evening and remove the FBI director.

"Let me be very clear that the president's decision to accept the recommendation of the deputy attorney general and the attorney general to remove Director Comey as the head of the FBI was based solely and exclusively on his commitment to the best interests of the American people and to ensuring that the FBI has the trust and confidence of the people this nation," Pence said.

But there are a few problems with Pence's explanation.

First of all, Rosenstein never explicitly calls for Comey to be fired in the letter he submitted to the president.

Rosenstein lists a number of ways the FBI director had acted inappropriately and implied those actions could be used to justify his removal, but stops short of asking Trump to fire Comey.

"Although the President has the power to remove an FBI director," Rosenstein wrote in his conclusion, "the decision should not be taken lightly."

The next problem -- and the most conclusive evidence that Pence is lying -- comes from a Washington Post report covering Trump's decision to fire the FBI director.

According to that report, and numerous others, the president had grown increasingly angry with Comey for what he believed was disloyalty, and he was frustrated that the FBI director always seemed to be on TV talking about the Trump campaign's alleged ties to Russia.

Trump complained while golfing over the weekend in New Jersey about Comey's "strange" congressional testimony last week, and he was "white hot" with anger that the FBI director said he was "mildly nauseous" that his actions in the Hillary Clinton investigation may have influenced the election.

The president called Pence and several other senior aides — Reince Priebus, Stephen K. Bannon and Donald McGahn, among others -- into the Oval Office on Monday morning and told them he was ready to remove Comey, according to the Post.

Priebus and Bannon cautioned Trump against the move, although senior adviser and son-in-law Jared Kushner supported the firing, but sources said the president had already made up his mind and was not interested in debate.

But he first wanted to talk to Sessions, who had recused himself from overseeing the Russia probe after his own contacts with the Russian ambassador were revealed, and Rosenstein, to whom Comey reported to directly.

Trump called the top two officials at the Justice Department into his office and notified them that he intended to fire Comey, a source close to the White House told the newspaper.

Several White House officials said that Trump ordered Sessions and Rosenstein to explain in writing the case against Comey.

They did, but Rosenstein was so unhappy that the White House had tried to pin the blame on him that he threatened to quit, according to that same report.

The president removed all doubt Thursday afternoon when he revealed to NBC News' Lester Holt that he had decided to fire Comey regardless of what the Justice Department recommended.

“Look, he’s a grandstander, a showboat,” Trump said of Comey. “The FBI has been in turmoil -- you know that, I know that, everybody knows that.”