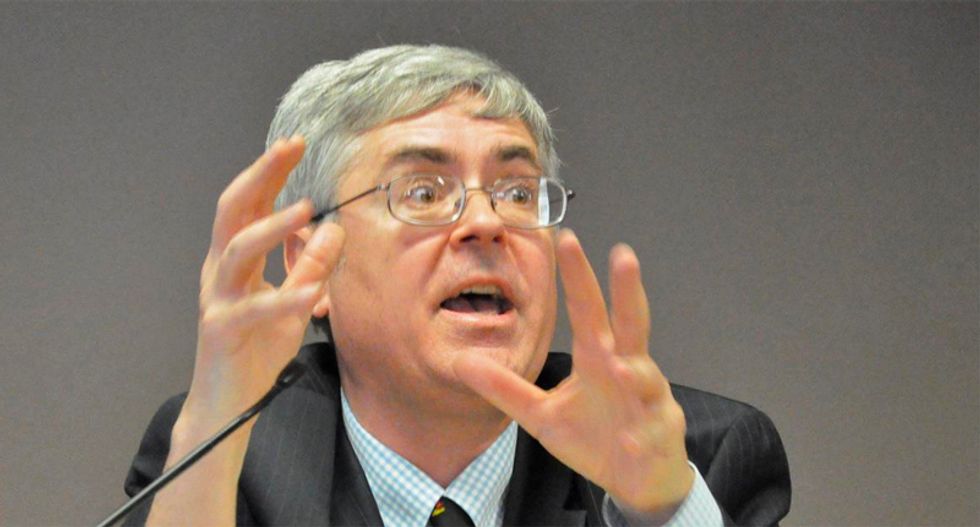 In light of the recent stabbing deaths of two men in Portland by a white nationalist -- and constant local street brawls between neo-Nazi groups and anti-fascist protesters -- the chairman of Portland's GOP party said he would consider hiring armed right-wing militia members as bodyguards to protect Republicans on the street.

In an interview with the Guardian, Multnomah County GOP chair James Buchal said that disputes between conservatives and progressives have many Republicans considering “abandoning the public square” which worries him.

“I am sort of evolving to the point where I think that it is appropriate for Republicans to continue to go out there,” Buchal explained. “And if they need to have a security force protecting them, that’s an appropriate thing too.”

According to Buchal -- a perennial GOP candidate for office -- he's not sure that conservatives can entrust their fate to the police or first responders and proposed using far-right militia members as bodyguards.

“Yeah. And there are these people arising, like the Oath Keepers and the Three Percenters,” he stated, adding, "We’re thinking about that. Because there are now belligerent, unstable people who are convinced that Republicans are like Nazis.”

According to the Southern Poverty Law Center, the Oathkeepers are, "one of the largest radical antigovernment groups in the U.S. today. While it claims only to be defending the Constitution, the entire organization is based on a set of baseless conspiracy theories about the federal government working to destroy the liberties of Americans."

The SPLC goes on to note, "In 2013, four years after its formation, the Oath Keepers announced the planned formation of 'Citizen Preservation' militias, which are meant to defend Americans against the New World Order. The real goal of these militias, which have since been renamed Civilian Preparedness Teams, is to prey upon the fears and concerns of local communities and revitalize the American militia movement, all under the guise of neighborhood watch and self-sufficiency."

As for the Three Percenters, they haven't escaped the watchful eye of SPLC either, with the civil rights organization pointing out that they specialize in anti-immigrant and anti-Muslim rhetoric.

According to Buchal, he is not troubled by the Three Percenters racist demagoguery, telling the Guardian, “right there on the front page [of their website] there is what looks like a solid commitment to this not being about race at all."

Bucahl went on to add, “I think that for a long time there has been a closing of the mind and a censoring to a point where now people feel justified in using force to prevent the expression of opinions with which they disagree. I believe that the left – the ‘antifa’ [antifascist] crowd – fired the first shot in that regard."

“There is definitely something wrong if criminal gangs are essentially allowed to shut down normal and traditional activities of Republicans," he added. "With that climate arising, the question becomes: ‘What do you do?’ A lot of the rank and file party members are old and frail people. They are intimidated by what’s going on.”