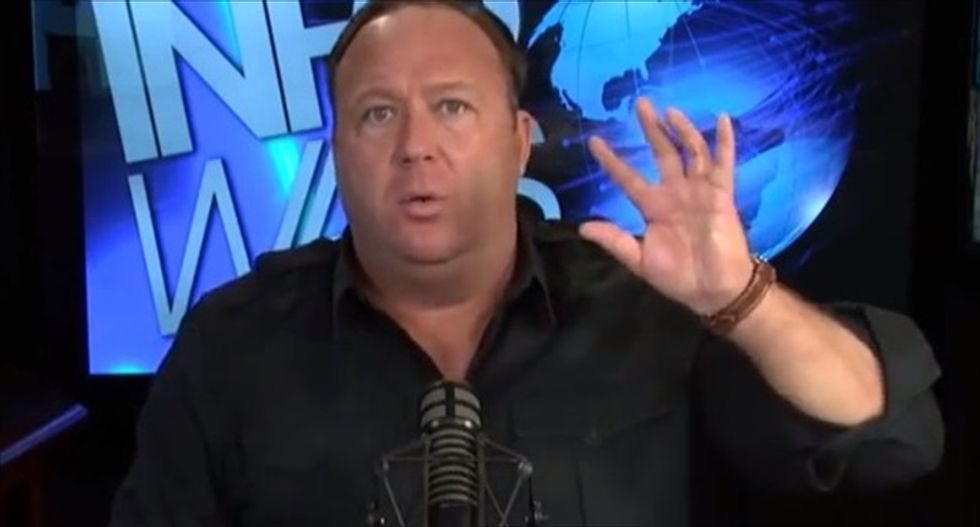 Alex Jones has been lurking around the fringes of American culture for more than two decades, but the bombastic conspiracy theorist has thrust himself into the political mainstream by backing a former reality TV host who wound up getting elected president.

But his sudden fame and close ties to President Donald Trump seemed to have knocked him off his game, as Buzzfeed's Charlie Warzel writes in a lengthy profile that starts with one hell of a lede:

"It was the winter of 1997 and Alex Jones couldn’t stop getting punched in the face," Warzel writes, opening with an anecdote about a decades-old brawl between Jones and a heckler.

Jones, then 22 years old and host of a low-rated show on Austin Public Access Television, challenged Clayton "SpaceHitler" Counts -- who frequently prank-called the future InfoWars impresario -- to a fight after he taunted him as "Jarhead Jones."

Witnesses told police that Jones ran to his car and pretended to grab a gun, before one of Counts' friends belted the young TV host in the face, in a scene that sounds like a cross between the cult classics "Slacker" and "UHF."

“Alex tried to fight back but was throwing wild punches with no form,” one witness, Charlie Sotelo, told Buzzfeed. “The guy is no fighter.”

Jones, whose public image suggests what might happen if a flexed bicep were blessed with the gift of speech, refused to confirm any details of the Buzzfeed piece, including Sotelo's appraisal of his fighting skills.

Here are seven other details from Warzel's deeply reported piece that he probably doesn't want fans to learn:

1. Jones got his first real media job when his dentist father set up a meeting with a station manager for KJFK-FM, and he nailed his audition and landed a talk radio program. "My name is Alexander Jones and I played football, man," he told one caller, through tears, "and my parents are still married and I'm a damned American!"

2. InfoWars employees say Jones plays fast and loose with the facts. One former producer said he could scan a newspaper headline placed on his desk and then rant about it for half an hour, and another former employee said his sourcing was highly suspect.

"Sometimes he'll say he has sources and he's been told a piece of news has been confirmed, but we wouldn’t have that information," the ex-Infowars employee told Buzzfeed. "Later we’d find out it was because a week earlier we had a caller on air who theorized about something and Alex repeated it as fact."

3. Jones is so intensely jealous of Rush Limbaugh that he mimics his voice on the air. "We'd spend weeks getting everything just right in the studio," a former employee told Buzzfeed. "Then he'd go for a drive and hear Rush again and say, 'I need my voice to sound something like that,' and so we'd completely re-engineer the sound to make him gruffer."

4. The InfoWars boss worried that President Barack Obama would lose the 2012 election and kill his business. Former employees said Jones fretted through election night and dropped hints that he voted for the Democrat's re-election. "I personally think he voted for Obama to keep ratings going," a former employee said.

5. Jones rakes in millions of dollars by stoking fear in his listeners -- fear of fluoridated water, fear of Fukushima radiation -- and then selling InfoWars products he promises will protect or cure them. "He can sell 500 supplements in an hour," a former employee said. "It's like QVC for conspiracy."

6. Former employees express disgust over Jones' bullying business practices, and for his "money bomb" telethons that take in $100,000 a day from sometimes cash-strapped listeners. "It made me sick to my stomach,” said one former employee, who spoke to an InfoWars fan who charged a donation to her credit card despite her home falling into foreclosure. "It became a moral issue for me," said another former employee. "It’s why I don’t work there anymore."

7. A longtime associate boasted that Jones -- who he described as "the Goebbels of 2016" -- was at least partially responsible for Trump's election, but a staffer told Buzzfeed that he "looked depressed" when it became clear the Republican would win. "His business is based on a fear of the left taking over a conservative way of life," the staffer said. "He has to have that power of fear — that idea that 'they're gonna take your guns.' Trump winning put it all in jeopardy."