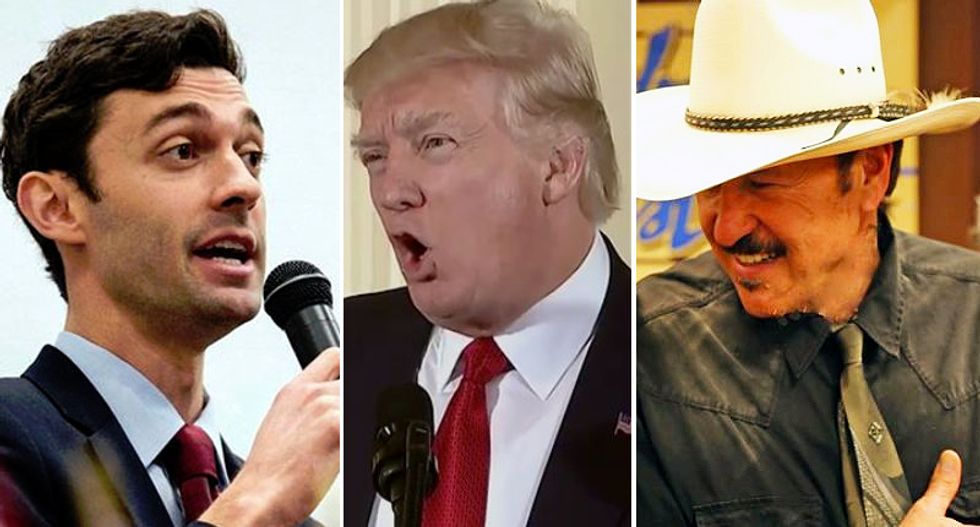 President Donald Trump's scandal-plagued White House has not only pulled down his own support among Americans, it seems to be taking down the Republican Party standing beside him.

Three major upcoming special elections in red states could hold the key to the future of the 2018 election. In the Georgia 6th District, newcomer Jon Ossoff is now polling seven points above his challenger Republican Karen Handel.

The Montana seat was previously held by Republican Ryan Zinke, who went on to serve in Trump's administration. Over the course of the last two days, Sen. Bernie Sanders (I-VT) has done four large campaign rallies across the state he won by six points in 2016. By contrast, Vice President Mike Pence struggled to get 800 to a rally for Greg Gianforte, who is suffering from a few scandals of his own.

One man revealed Monday that he received a get out the vote phone call asking who he was voting for. When he revealed he was casting his ballot for Democratic candidate Rob Quist‏, the caller told him that "early voting begins Thursday." The election is on Thursday, May 25, as such, it ends Thursday.

Recent polling shows Quist and his Republican opponent are dead even in the race. Planned Parenthood announced that they are getting involved in the race as well, with a GOTV effort in a state that Trump won by 20 points.

Virginia's state elections have brought with it ads from Democratic candidates boasting of how he'll "stop Donald Trump." Progressive Ralph Northam not only boasts of fighting the NRA, opposing the trans-vaginal ultrasound bill and supporting same-sex marriage before it was popular. But it was a recent ad that made news when the Democrat called Trump a "narcissistic maniac." Polling in the state shows both Democrats would beat Republican Ed Gillespie.

Last fall may have been a "surprise gift to Republicans" according to Courier-Journal columnist Al Cross, but it may have ended there. While the GOP has sought to pass conservative legislation and Trump has signed executive orders to rollback progressive policies. It adds to a slew of scandals and gaffes coming out of the new White House administration, snowballing into a boulder that could take out any Republican who touches it.

The Cook Political Report calculated that 24 Republican Congressional seats are in danger of turning blue and only 25 would give Democrats the majority again. These numbers were before Trump's roughest newsweek yet, where each day brought a new and larger scandal or gaffe. At the same time, Trump is struggling to get back above 40 percent in nation-wide polls.

Senate Majority Leader Mitch McConnell is between a rock and a hard-headed president. Thus far, he has been resistant to speak out against Trump. His fears might come from the Republican base, who are still loyal supporters of their new president. A May 14 Gallup poll showed Trump at 84 percent among conservatives, but after the scandal-plagued newsweek, his polling actually went up among them. Turning on Trump could mean losing the base for Republican candidates as well money that will be critical in funding special elections.

According to a Monmouth University poll, Trump's 300 counties he carried by single digits in November has dropped to just 34 percent. A Quinnipiac University poll is even more daunting. Prior to last week's breaking scandals, 54 percent of Americans would prefer Democrats controlling the House. Only 38 percent still support Republican control. In red-state Kentucky, Trump has even lost white voters without college degrees. Only 47 percent support the president, down from 57 percent. Among those, only 34 percent say they support him "strongly."

Money, time and finding the perfect candidate might be the only things the Democratic party needs to ring in a new takeover.