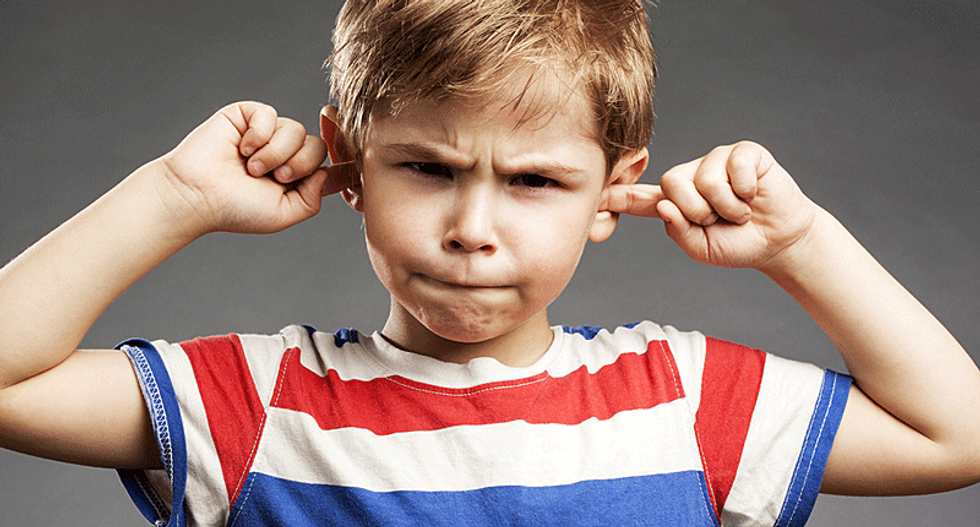 Boy with fingers in ears (Shutterstock)

Psychologists have long known that the brain is able to deduce the differences between what is true and what might not be true. Yale professor Dan Kahan called it identity-protective cognition, noting that we intuitively reject facts that contradict our own values. So, scientists are searching for a way to inoculate against it.

According to a Vox report, scientists are looking at campaigns used to urge teens to resist smoking as a means to help people understand climate change is real. These two studies might prove that minds can be changed in the face of fake news. Given recent tweets, President Donald Trump might even be supportive because the "vaccine" is a kind of "booster" for facts.

Cognitive scientist John Cook tested an "inoculation" message against the Oregon Petition, which used fake climate experts to discount existing consensus on climate change and its cause. The George Mason University professor at the Center for Climate Change Communication explained that if survey participants were warned of possible misinformation they were able to counteract their own political beliefs.

In a study with 100 participants, a group was given a report but told ahead of time about intentional misinformation campaigns. The effect of the misinformation was altogether nullified. The respondents were warned that fake experts were often used by the tobacco industry to refute scientific consensus about the dangers of smoking. They were then shown an ad with text reading “20,679 physicians say ‘Luckies are less irritating.’” The results showed politics and values didn't matter.

“Nobody likes to be misled, no matter their politics,” Cook explained, urging that people might be able to save themselves from being tricked.

A second study by Cambridge psychology professor Sander van der Linden gave more than 2,000 people an "inoculation message" about climate change. The first was a short message saying “some politically motivated groups use misleading tactics to try to convince the public that there is a lot of disagreement among scientists.” They were then told that there is no disagreement that humans are making the climate to change. The longer message debunked the Oregon Petition before mentioning the inoculation message.

Surprisingly, both worked but the shorter message wasn't as effective as the longer one.

Cook and van der Linden both believe that the tactic can be used to combat defensive reactions, even among those who resist facts that challenge their values. Van der Linden's previous studies even show that acceptance can be the first step toward a changing of views

“Consensus messages don’t ask people to change their beliefs — they ask them to change their opinion about what other people believe, so they’re not a direct threat to their identity,” he explained. “We’ve found that they’re one way to get people more aligned on the side of climate science.”

He also noted that majority opinions from respected groups like climate scientists tend to be as much if not more than conservatives and liberals. However, they have the added benefit of decreasing political polarization in the process.

Cook has found evidence in his own Skeptical Science blog to counter misinformation about climate change as well. He once avoided talking about misinformation while trying to debunk it. Now he uses an inoculation message instead.

“You can’t talk around it; otherwise it persists,” he told Vox. “What’s important is to lead with the facts — the facts are the headline — then introduce the myth, and then explain why it’s wrong.”

He did it again when writing a response to a "National Review" article using his work to question climate science.

“There is a consensus of evidence that human activity is causing all of recent global warming. Not some of it. Not even most of it. All of it,” his response began. He doesn't begin the inoculation until the sixth paragraph. “Unfortunately, it’s all-too-easy to mislead people into thinking that experts disagree on human-caused global warming,” he writes. “If you want to work out whether you’re getting taken in with the fake-expert strategy, take a closer look at the ‘experts’ who are being cited.”

While many can't write 1,000-word essays responding to sound bites, Cook explained that even a brief warning can have an impact and prevent in a "herd mentality." People who adopt the inoculation message then go on to spread the "immunity" through conversations about what they read or learned.

Because climate science has become so polarizing, people are resistant to talk about it in "polite company." But, inoculation can also encourage people to talk about things they haven't felt like they know enough about by making them more confident in their position.

“Teaching the controversy” actually isn't a bad idea afterall. The trick is educating the difference between what is false and what is real.

“Because inoculation presents both the facts and the myths, it creates this conflict — students want to know how these two things can exist together,” Cook argued. “So you have to resolve it, and that turns into a compelling story.”

Making it work with political leaders is another thing entirely, however. It would not only require moving the opinions of Republican elected officials but Republican voters who support them and changing the party platform. Still, Cook is hopeful it can be done.

An almost 3,400-year-old industrial, royal metropolis, “the Dazzling Aten", has been found on the west bank of the Nile near the modern day city of Luxor.

Announced last week by the famed Egyptian archaeologist Dr Zahi Hawass, the find has been compared in importance to the discovery of Tutankhamen's tomb almost a century earlier.

During a press conference at the White House this Wednesday, reporter Owen Jensen from the Catholic news network EWTN asked Jen Psaki a question regarding the Biden administration's move to reverse a Trump-era family planning policy.