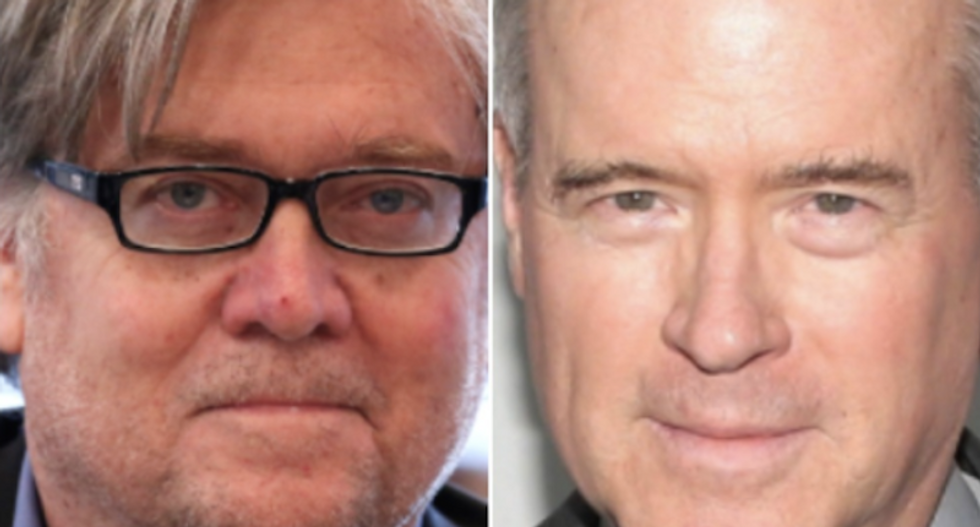 A secret legal document shows two Brexit campaigns may have illegally coordinated under the direction of Trump megadonor Robert Mercer.

The confidential document shows the data firm Cambridge Analytica, which was hired by Leave.EU during the British election campaign, purchased the intellectual property license of AggregateIQ, which was retained by Vote Leave, reported Carole Cadwalladr for The Guardian.

Cadwalladr reported the purchase last week, but a source shared the intellectual property license that proves the two campaigns -- which publicly feuded during the election -- were financially tied together.

"On the surface, the two main campaigns, Leave.EU and Vote Leave, hated one other," Cadwalladr reported. "Their leading lights, Farage and Boris Johnson, were sworn enemies for the duration of the referendum. The two campaigns bitterly refused even to share a platform."

British law prohibits election campaigns from coordinating unless those expenditures are jointly declared, which is intended to prevent the "buying" of elections -- but that seems to have happened during the Brexit campaign.

“To have a billionaire so directly buying influence in a British election is absolutely unheard of," said Gavin Millar, an election law expert. "This is completely out of the ordinary, and what’s clear is that our electoral laws are hopelessly inadequate. The only way we would be able to find the truth of what happened is through a public inquiry.”

Cadwalladr has been probing the links between the Trump campaign and the Brexit campaigns through Cambridge Analytica -- which she said leads directly to Mercer and his close associate, Steve Bannon, who is now President Donald Trump's chief strategist.

Mercer, a hedge-fund billionaire and artificial intelligence developer, owns Cambridge Analytica, which was spun out of the British elections consulting firm SCL Group, which specialized in using military-style "psychological operations" during political campaigns.

Bannon headed Cambridge Analytica during the Brexit referendum, and after it passed he joined another Mercer associate, Kellyanne Conway, to lead the Trump campaign during its final months.

Cadwalladr has been tugging the threads connecting those Trump campaign figures to the Brexit referendum since Leave.EU’s communications director, Andy Wigmore, told her that Farage was close friends with both Bannon and Mercer.

Wigmore said Farage, Mercer, Bannon and other future Trump associates had met at a conference in Washington.

Cadwalladr's reporting, which has helped trigger two investigations in Britain, has been challenged as inaccurate by former Brexit campaign officials and lawyers for both Cambridge Analytica and SCL Elections.

But Wigmore said the Leave campaign served a "petri dish" for the Trump campaign, which drew Mercer's backing after Sen. Ted Cruz (R-TX) fell behind in the Republican primaries.

During the U.S. presidential campaign, Cambridge Analytica lawfully gathered mountains of data on Facebook users and then used tactics developed by the military to individually target them on social media with political messaging.