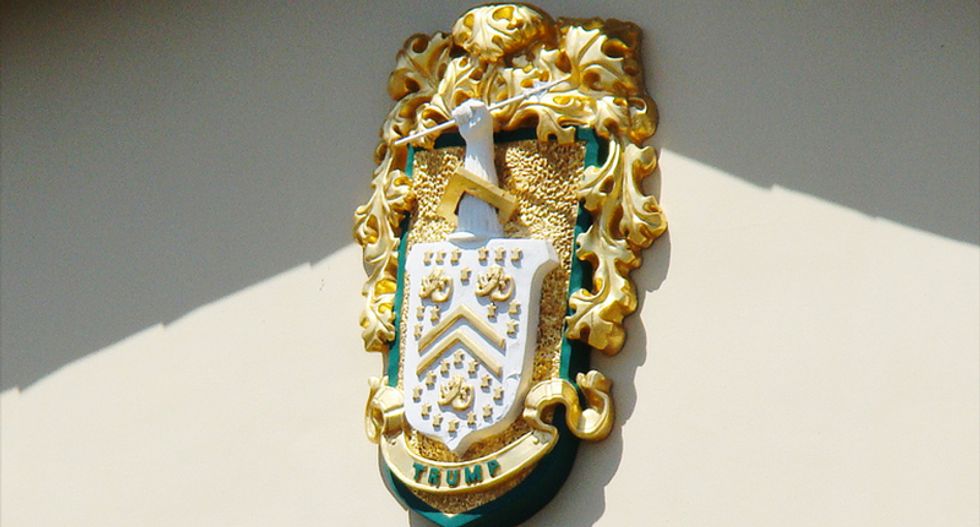 News broke Monday that President Donald Trump appears to have plagiarized his family coat of arms that appears outside of the Trump National Golf Club outside of Washington. This weekend the Senior PGA Championship was hosted at the golf club and the "Trump family coat of arms" was featured on signs all over.

The actual emblem features three lions and two chevrons on a shield with a gloved hand gripping an arrow or spear, The New York Times reported. The coat of arms was originally granted by British authorities in 1939 to Joseph Edward Davies. He was the third husband of Marjorie Merriweather Post, the man who built the Mar-a-Lago resort in Florida. Ironically, he once served as the ambassador to the former Soviet Union.

The Trump Organization staged a hostile takeover of the coat of arms and replaced the Latin word for "integrity" with "Trump."

Davies grandson Joseph D. Tydings, a former U.S. state senator from Maryland, admitted there are members of his family who are ready to sue Trump, but he cautioned against it. Tydings once worked for a large firm that managed Trump. He told his family that the suit would end up costing generations after them money.

“This is the first I’ve ever heard about it being used anywhere else," Tydings said of the coat of arms placement at the northern resort.

When Trump tried to bring the American version to Scotland for his new development the authorities refused to allow the usage.

The internet was not necessarily surprised by Trump stealing the coat of arms. Instead of encouraging the lawsuit, the internet sought mockery instead:

@BraddJaffy Shall we talk about his fake ancestry in light of his "Pocahontas" jabs now?
— Gavin Ivester (@Gavin Ivester) 1496064365.0

I can't think of a better metaphor for Trump admin. He stole his coat of arms from someone else but replaced INTEGR… https://t.co/KHfpZaEmPd
— Jesse Ferguson (@Jesse Ferguson) 1496012580.0