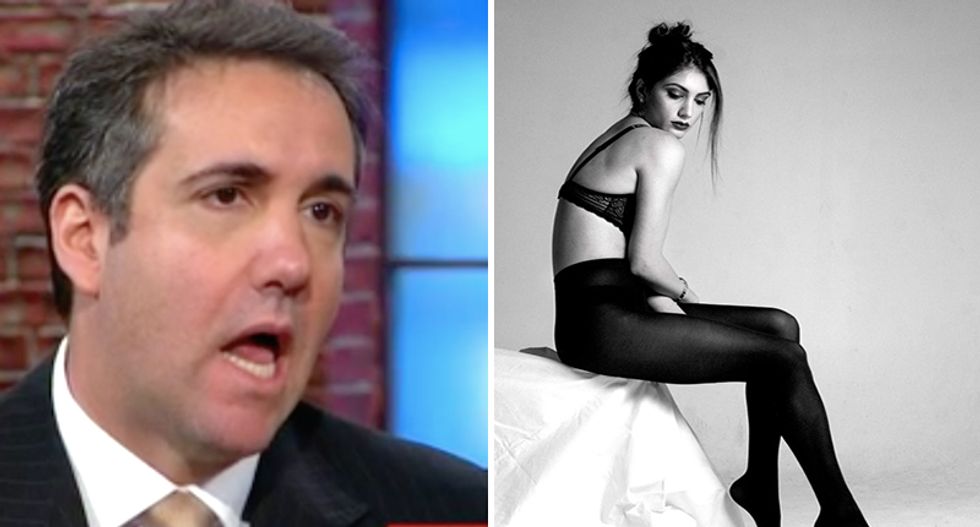 President Donald Trump's attorney Michael Cohen tweeted a photo of his "Ivy League daughter" Sunday night in her underwear and called her beautiful and smart.

It was not received well by followers and opponents.

"This type of reply might be more creepy than you posting the pic, bro," replied Twitter user Patrick Quaife‏.

Many others agreed, saying that she is certainly lovely and worthy of praise for her intelligence but having a father tweet a photo of his daughter in lingerie seemed strange.

"Most fathers don't post lingerie shots of their daughters. I guess #Trump must be rubbing off on you," Twitter user Professor Chaos replied.

At that point, Cohen seemed to get angry.

"Beauty and brains you a-hole! It's a modeling shot remake from an old Edie Sedgwick photo. #hater," he tweeted.

"Yep, she's gorgeous, however, most fathers don't share lingerie pics of their daughters on social media Mr Creepypant," @annanotherthng explained to him.

Trump was frequently criticized for the way he has spoken about his daughter Ivanka.

"After I met Ivanka and praised her to her father, he said, 'Yeah, she’s really something, and what a beauty, that one. If I weren’t happily married and, ya know, her father...'" Rolling Stone writer Paul Solotaroff wrote last year.

It added to a controversial comment Trump made about Ivanka that Dr. Oz edited out of his interview. Trump confessed that he kisses his daughter every chance he gets.

When asked on "The View" how he would feel if his daughter posed nude in Playboy he said it would only be disappointing depending on the other things in the magazine.

"I don’t think Ivanka would do that, although she does have a very nice figure," Trump said. "I’ve said if Ivanka weren’t my daughter, perhaps I’d be dating her.”

That wasn't the first time either. In a 2003 interview on "The Howard Stern Show," Trump confessed his daughter had a hot body and took credit for creating her.

"She’s six feet tall, she’s got the best body. She made a lot of money as a model—a tremendous amount,” he said.