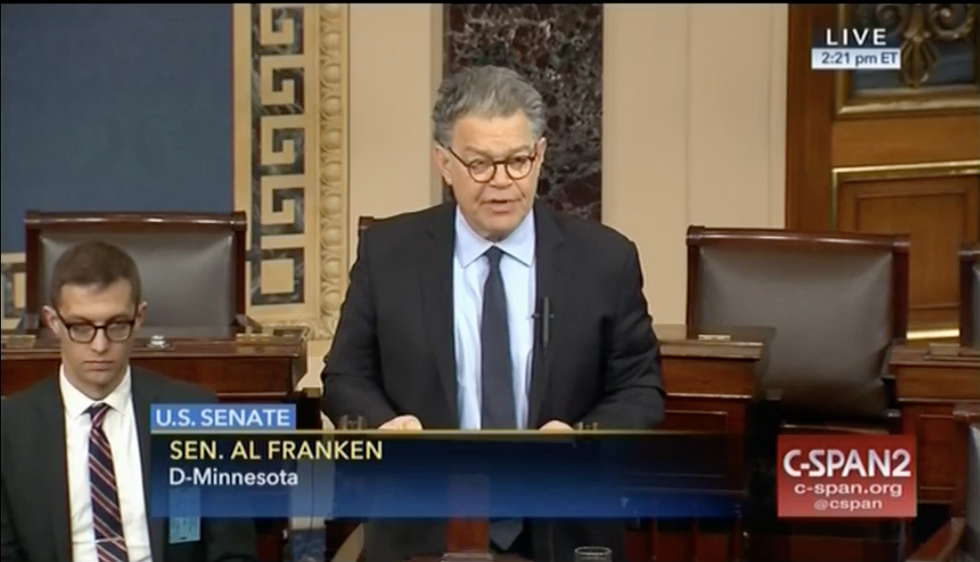 On Wednesday, Sen. Al Franken (D-MN) took to the Senate floor to discuss Tuesday's firing of FBI Director James Comey and the facts as we currently know them pertaining to the investigation of President Donald Trump and his associates' connections to the Russian government.

We know that the Russians mounted a complex operation to interfere with the 2016 U.S. election. We also know, Franken said, that they did this with the intent of helping former reality TV game show host Trump, hindering Democratic nominee Hillary Clinton and undermining public confidence in the election system.

"These facts have been confirmed by our intelligence agencies," Franken said. "What we don't yet fully understand is all the reasons why the Russians favored Donald Trump and whether members of his campaign assisted in the Russian operation to sway the election in his favor."

These questions are the subject of an active and ongoing investigation.

"The timing of Mr. Comey's dismissal raises questions," Franken said, "and Mr. Trump's decision to abruptly fire the man leading an investigation that could implicate the Trump administration should shock the conscience of every American who believes that no man or woman is above the law."

Regarding the documents provided by the White House and the Justice Department explaining the rationale behind Comey's ouster, Franken said, "Mr. President, these documents really create more questions than they answer."

Watch the video, embedded below in two parts:

Michael Steele issues dire warning: 'Marjorie Taylor Greene will be the most powerful Speaker of the House'

Rep. Marjorie Taylor Greene (R-GA) will essentially act as Speaker of the House if Kevin McCarthy gets the job, according to former Republican National Committee chairman Michael Steele.

Donald Trump still controls the party, and is likely to win the GOP nomination for president in 2024, but Steele told MSNBC's "Morning Joe" the party was fully in the thrall of an increasingly extreme base personified by Greene, was just re-elected to her second term in Congress.