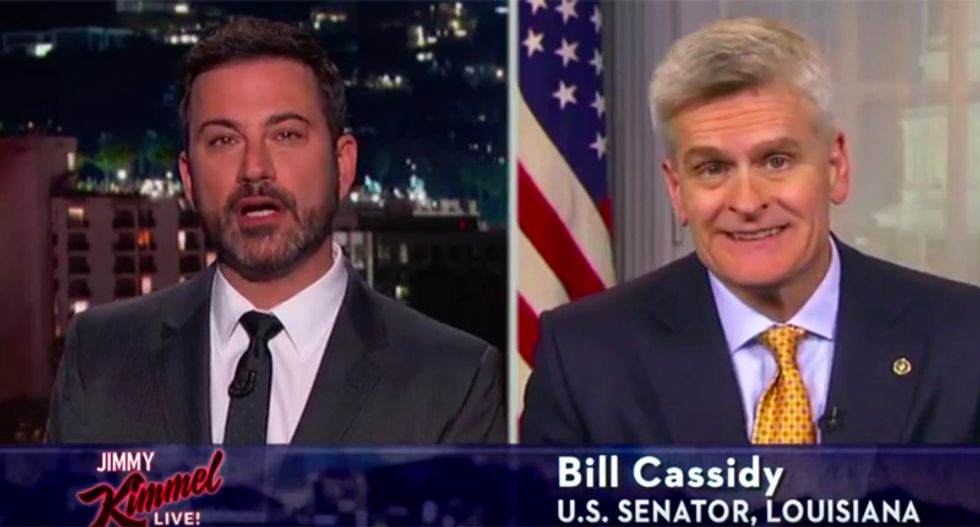 The Republican senator who established a new benchmark for adequate healthcare for children -- called the "Jimmey Kimmel test"-- appeared on the late night comic's show to urge the public to push lawmakers to amend the so-called Trumpcare replacement plan to take care of newborns.

Sen. Bill Cassidy (R-La.) broke ranks with many conservatives last week when he cited Kimmel's heartrending story about his newborn son needing heart surgery -- saying any healthcare plan should be held to his Kimmel standard.

Invited to appear by live remote by host Kimmel, Cassidy pushed for a more generous healthcare plan that helps all Americans and brought up President Donald Trump's campaign promises.

"If you take the most prominent Republican politician, Donald Trump, he has said that he actually wants all to be covered, he wants to take care of pre-existing conditions without mandates -- Americans hate mandates -- and lastly, maybe most importantly, he wants to lower premiums," Cassidy said. "We have got to have insurance that passes the Jimmy Kimmel test."

Cassidy knocked the House version of the AHCA, saying it made premiums climb and said it was up to the Senate to fix that.

Asked if all Americans deserve to have affordable healthcare, Cassidy answered with a simple "Yup."

Cassidy closed by urging voters to call their senators -- Democrats and Republicans alike -- and press them to create a healthcare plan that mirrors what Trump promised and also passes the Kimmel test.