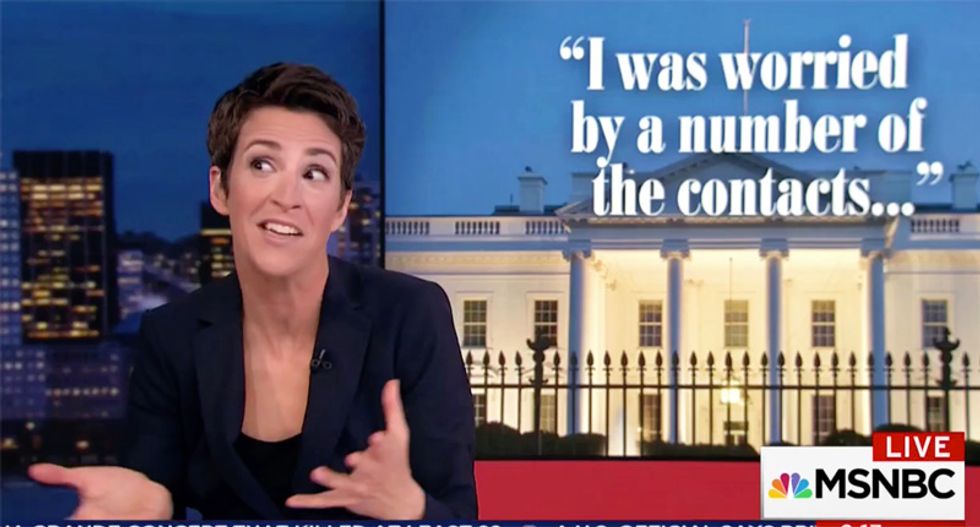 Tonight on MSNBC, Rachel Maddow reviewed the latest developments in the investigations of Donald Trump, connecting the dots on two key pieces of testimony from Capitol Hill.

"Former CIA Director Brennan also helped everyone understand today, maybe for the first time in open session, how this kind of thing might have worked, how the -- if this was a Russian Op, if our election was, in part, a foreign intelligence operation, how might the Russians conceivably have pulled this off?" Maddow wondered.

"I have studied Russian intelligence activities over the years and I have seen it manifest in many different cases and how they have been able to get people, including the CIA, to become treasonous," the former CIA Director explained while testifying today. "Frequently individuals who go along a treasonous path don't even realize it until it's a bit too late."

He continued, "having been involved in a lot of counterintelligence cases over the years and seeing this pattern over and over again, my radar goes up when i see that the Russians are actively involved in a particular intelligence, operation or campaign and that U.S. persons are being contacted by Russian officials."

Maddow then discussed the intersection of unwitting collusion and cover-up by Maddow highlighting a question by Rep. Eric Swalwell (D-California).

"Director, there is what is referred to as consciousness of guilt evidence, when somebody lies about a material fact, the fact of then lying can be used against that person because it would be, in essence, an effort to cover up what happened. Meaning, if you were telling the truth, you wouldn't have anything to cover up," Rep. Swalwell questioned. "With respect to some of these Russia and Trump campaign officials, are you aware of any of those U.S. persons who had contacts with Russia either making false statements about those contacts or failing to disclose those contacts?"

Former Director Brennan refused to answer, suggesting to Rep. Swalwell, "I think that's something that you can pursue in closed session."

"So the Russians may be really good in drafting Americans into their schemes against the United States," Maddow said of the significance. "But once Americans are involved in those schemes and they start lying about that fact, concealing that fact, well, then that concealment, you know, takes it into a closed session."

Maddow claimed the Trump administration, "continues to deny knowledge of those foreign payments to [Mike Flynn], even after they were notified about that emphatically and over a period of weeks and months, multiple times, to the point where the Mike Pence-led transition sent a thank you for when they put in writing to the transition their concerns about Mike Flynn's foreign payments."

Watch the whole clip below: