WATCH: Scott Walker blows up at county exec for asking about people losing health care instead of tourism 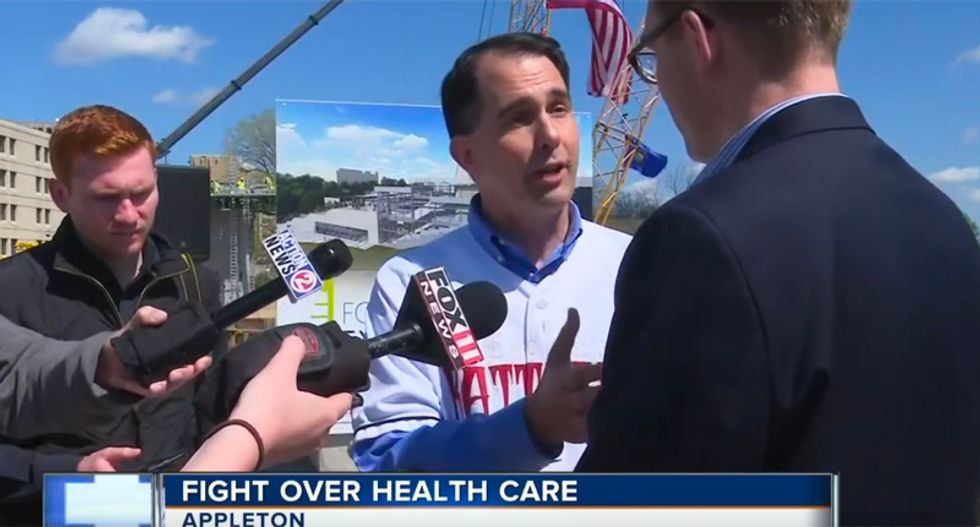 Wisconsin Gov. Scott Walker (R) snapped at a Democratic county executive on Friday for asking him how he will handle citizens of Wisconsin losing their health care under the GOP-controlled House vote to repeal and replace Obamacare.

Appearing at an Appleton event to promote tourism, Walker snapped at Outagamie County Executive Tom Nelson for asking about the AHCA, accusing the local official of a "political stunt," with Nelson pointing out, "Look, this obviously has gotten under your skin."

As cameras rolled, Nelson attempted to engage Walker on what his plans are to keep Wisconsinites insured only to have the governor snap back at him, reports WBAY.

"The plan is I'm going to wait for what the Senate and the president do, and we'll see from there," Walker replied before grandstanding for the cameras in mock outrage. “So just to be clear folks, just to be clear, the county executive wants to take away from tourism right now and play a political stunt about a topic that has nothing to do with what we’re talking about today."

"Look, this obviously has gotten under your skin," Nelson shot back

"What's gotten under my skin, ladies and gentlemen," Walker said as he again addressed the cameras, "is the fact that someone decided to pull a political stunt and show up at an event about tourism."