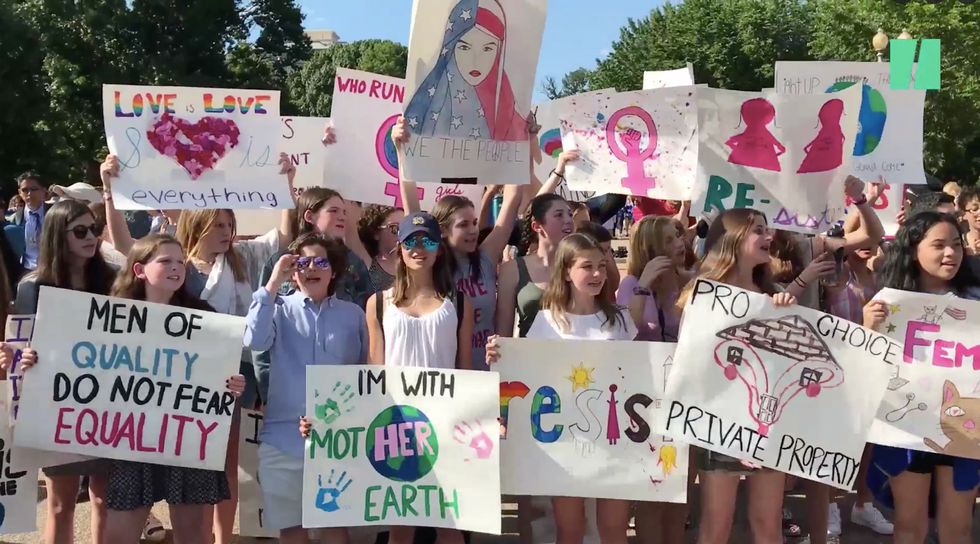 A group of eighth graders on a field trip from Chicago joined an impromptu protest outside the White House on Thursday.

According to HuffPost, protesters angered by President Donald Trump's decision to pull out of the Paris Climate Accord gathered in front of the White House to march and chant on Thursday afternoon.

The group of about 75 Chicago middle schoolers were passing the White House on a tour, but reportedly asked their teachers if they could join the protest.

HuffPost said, "It’s an annual trip for the students at Francis Parker School, a private school with progressive leanings. Kam Woodard, an eighth-grade math teacher there, said teachers told the kids this time that, if they wanted to make signs to voice their feeling on an issue, they could do so. So many of the roughly 75 students made signs about women’s rights, environmental rights and human rights in general."

The kids made up their own chants, including "Science saves!" and a call-and-response that went, "Climate change is real!" "DUH!" back and forth.

Last week, a group of about 100 eighth graders from South Orange, NJ refused to pose for a picture with Speaker of the House Rep. Paul Ryan (R-WI) saying they didn't want to be associated with him or his right-wing agenda.

“It’s not just a picture,” student Matthew Malespina said to ABC News. “It’s being associated with a person who puts his party before his country.”