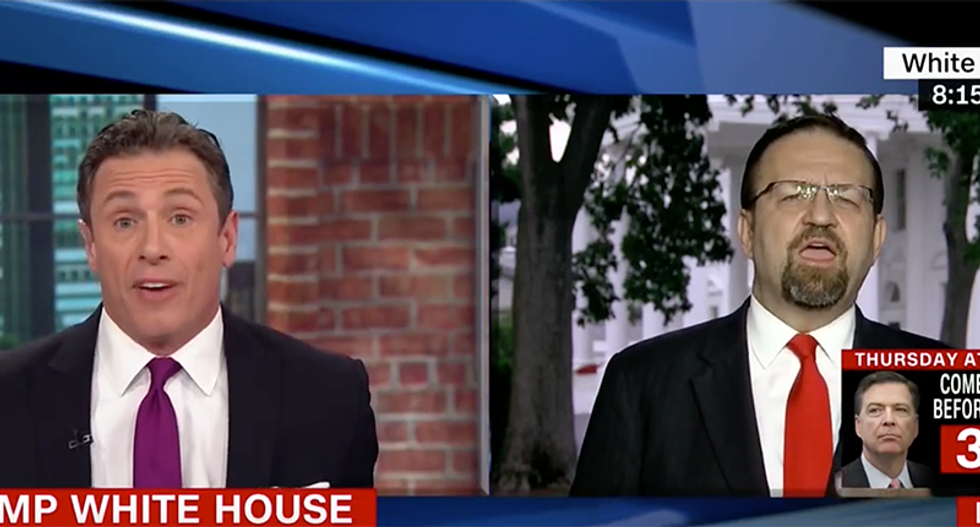 Cuomo began by asking how Trump managed to unravel months of the White House 'spinning' that Trump's ban on immigrants coming into the United States is not a "Muslim ban" or a "travel ban."

“The president can call it whatever he likes because he has the Constitutional authority to determine who comes into the United States," Gorka claimed.

Cuomo was quick to follow up by asking why, if that was the case, the White House felt the need to spend all of those months spinning that it wasn't a ban. Gorka followed up that CNN is the greatest "purveyor of fake news.”

The conversation ultimately devolved into Gorka trying to distract by attacking CNN saying that the network is failing. Cuomo blasted back that CNN's numbers are up over 100 percent over the last year, which Gorka attempted to claim was wrong.

Gorka then went on to say that he'd rather talk about President Trump's policies, but Cuomo insisted that the tweets were about the policies.

"I think that you need to have a little understanding here," Cuomo said.

"This is about national security," Gorka said, claiming that people are too obsessed with Trump's tweets and not the policies. As a fact check, Trump's tweets were about his policies.

"And maybe he shouldn't tweet about it," Cuomo called back. "Listen, the fact is that he took the opportunity in the wake of the attack on London to

"It's a lie he didn't tweet that?" Cuomo asked. Gorka said the ban on Muslims was a lie.

Gorka then went on to talk about how they don't give away sensitive information. Sarcastically, Gorka said, "we leave that up to leakers."

"Giving intelligence to the Russians, though, that was alright?" Cuomo countered.

Later in a panel discussion, former Ambassador to Russia, Thomas Pickering noted "what the president says means is U.S. policy" and as such, it matters.

"Or it doesn't! If you listen to his staff some days," host Alyson Camerota said.

CNN's Fareed Zakaria later agreed that the medium the president uses doesn't matter and that each later uses a different medium, citing Franklin Roosevelt and Winston Churchill used the radio.

Watch the heated interview below:

CNN interview with Trump adviser goes off the... by sarahburris

Part 2 of the Gorka v. Cuomo battle by sarahburris