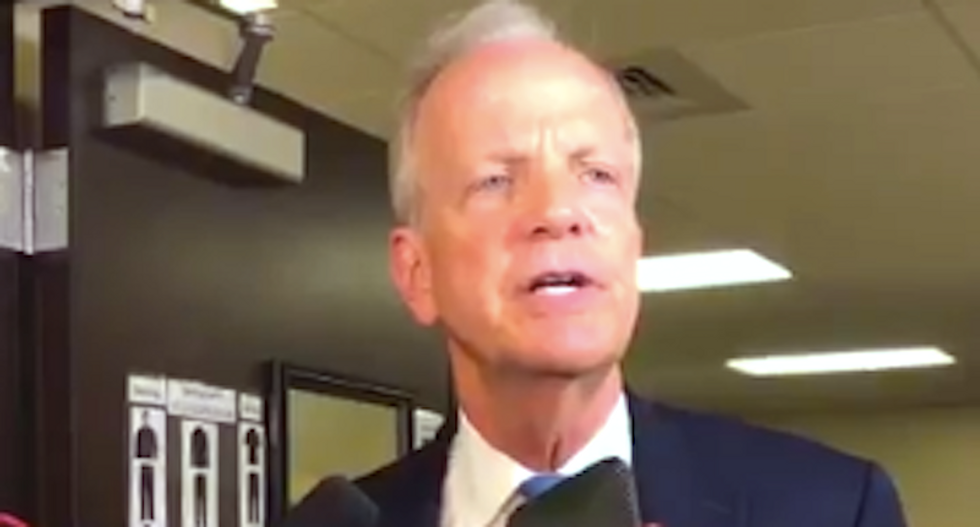 A Kansas Republican heard an earful from constituents -- who demanded answers on health care, Jeff Sessions and Betsy DeVos -- Monday morning during a town hall meeting.

Sen. Jerry Moran (R-KS) told a packed house that he would not have voted for the House version of health care reform, and he called for open Senate hearings on the legislation -- but he would not say he would refuse to vote for the bill without a public hearing, according to Kansas City Star reporter Bryan Lowry.

Moran drew a standing ovation when he repeated an audience member's question about why Republicans had not invited any women to serve on the health care committee.

Voters also pressed Moran to explain why he voted to confirm DeVos as education secretary, and they demanded to know whether he regretted his confirmation vote of Sessions as attorney general after his secret meetings with the Russian ambassador were revealed.

"I know Jeff Sessions and I would not do so at the moment until I know what the facts are," Moran said.

Man asks Moran if he's happy with his vote for Sessions, would he do it again. Moran says not unless he knows what the facts are.
— Bryan Lowry (@Bryan Lowry) 1497273798.0

Moran said he wanted to know more about those meetings before deciding whether Sessions should have been confirmed, and he explained afterward that he thought Sessions was entitled to defend himself.

Sessions is expected to testify Tuesday before the Senate Intelligence Committee.

Constituents told Moran they were frustrated, but not angry, that Republicans didn't seem interested in hearing from voters on important issues -- and they chided him for starting the town hall at 7:30 a.m.

Moran told an audience member he understood why she was upset after she complained about DeVos.

"I understand that, you should be," Moran said. "Americans should be upset, lots of things to be upset about."