'He does not think rationally anymore': Morning Joe worries Trump's mental health is getting worse 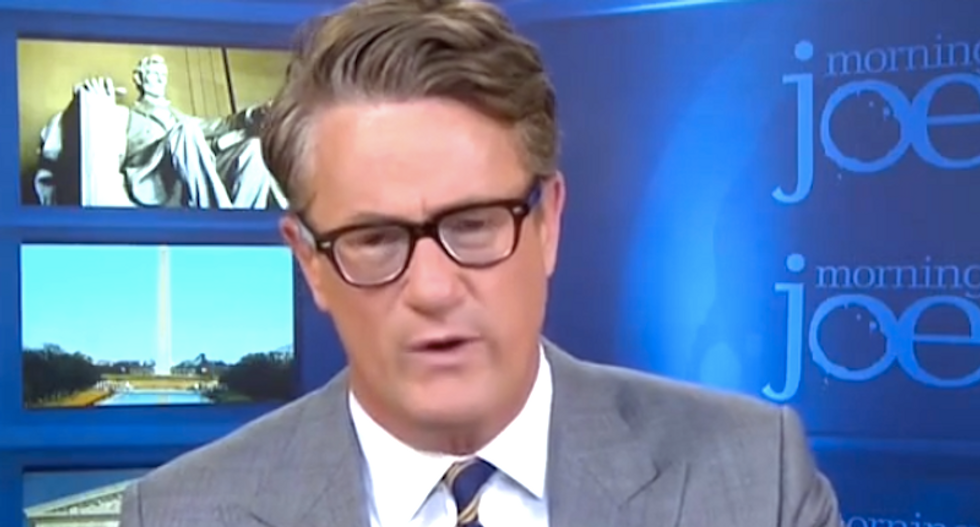 MSNBC's Joe Scarborough questioned the president's mental health, and he suggested it was time for Congress to remove him from office.

The "Morning Joe" host has previously raised the possibility that President Donald Trump is in the early stages of dementia, but he and other panelists agreed his "erratic" and self-destructive behavior appeared to be growing worse.

"If any CEO of a Fortune 500 company was behaving this way, he or she would be removed immediately," Scarborough said.

Scarborough was troubled that the president boasted that his tax reform bill -- which does not yet exist -- was "moving along in Congress" and "doing very well."

"If (a CEO) went out and said, 'Hey, we have a new product line coming out tomorrow. let me tell you about it, it's going to be the greatest product line you've ever seen,' and there is no product -- and I'm being dead serious here -- they would take him out," Scarborough said. "He would have psychiatric evaluation and he would no longer with the CEO there. What do we do here?"

Scarborough was especially troubled by Trump's tweets about the controversial "travel ban," which undercut his own lawyers' arguments and was part of a pattern of behavior that had White House staffers "pulling their hair out."

Panelist Donny Deutsch, who has known Trump for years, said the president "clearly has a personality disorder."

"When you have a personality disorder, you need to create drama to feel alive," Deutsch said. "I'm not a clinician, but that is kind of the analytical behavior of what he does."

Scarborough said the president was no longer fully in control of his own actions.

"He doesn't know any better," Scarborough said. "There is not a sane, rational human being that would have tweeted what he tweeted (Monday) knowing that the Supreme Court was sitting there and watching and reading and listening and knowing what everybody else in the White House knew the second he started those tweets, that it was against his own interest."

He also questioned the rational basis for Trump's insults against the mayor of London following deadly terrorist attacks.

"Listen, even the most evil, cynical person would restrain themselves during that time because they knew it would cut against their best interests," Scarborough said. "This man sitting in the White House, he does not think rationally that way anymore."