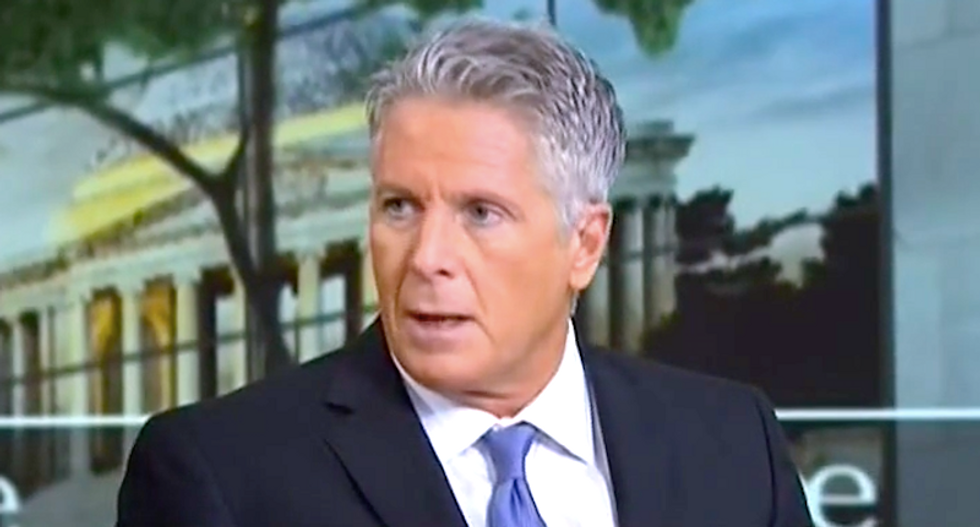 MSNBC's Joe Scarborough and Mika Brzezinski postponed their July 4 vacation to respond to President Donald Trump's personal attacks against them on Twitter, but they didn't immediately appear on their program.

Instead, the "Morning Joe" co-hosts didn't appear until the second hour of their program, and their colleagues came to their defense.

"He's a pig, he's a vulgar pig, and I find what's ironic Michelle Obama says when he goes low, we go high," said Donnie Deutsch. "You guys take the high road, I'll go low. He's physically disgusting to look at. So beyond the fact he's obviously not well, the misogyny ... besides the obvious vulgarity, the obvious stupidity, he's not mentally okay. This is what -- we have to start paying attention to it and he's disgusting to look at.

"He’s a vulgar pig — he’s physically disgusting to look at," said Donny Deutsch, who first appeared wearing sunglasses to mock Trump's claim that Brzezinski was "bleeding badly from a face-lift."

"I had a little work done, and I just am a little self-conscious about it, just a little eye thing -- I'm a little sensitive to it," Deutsch joked, before launching into a harsh condemnation of the president.

"Enough is enough with this disgusting, vulgar man," Deutsch said, "and to talk about women that way and the irony is that you physically look like you do. Beyond the stupidity of it, you're a pig, you are a bully and you are doing disgusting things to this country."

Co-host Willie Geist, filling in for Scarborough and Brzezinski, asked Deutsch whether he was helping to lower the discourse by responding to Trump's insults some of his own.

"It absolutely does," Deutsch agreed. "Maybe it's time we all stop tippy-toeing. He's disgusting to look at. I probably won't be on this show again."

Harold Ford, however, thought the political analyst and advertising executive had struck the right tone.

"There's something about smart, strong, substantive women that really gets under Donald Trump's skin," Jordan said, "and to just make up this complete, strange lie which is quite creative. I sit by Mika, and if she's got, I don't know, work -- gotten work, I want to know who her surgeon is because there was no indication whatsoever."

Geist pointed to a trend that he said both Scarborough and Brzezinski had also noticed.

"Joe will say something very critical to the president of the United States, and the hit comes against Mika," Geist said. "Mika's critical, too, she said some things that obviously got under the president's skin. But we notice Joe says something, and it's Mika who gets hit on it."

Historian Jon Meacham was surprised by the president's insulting response to a critical TV news segment.

"You would think 'Morning Joe' was a sovereign power," said Meacham, executive editor and executive vice president at Random House. "Are we on a watch list? I mean, how does that work?"

"To me, what links this and what makes this significant beyond the sovereign power is the question of fear," Meacham said. "He fears people who are intelligent and who don't approve of what he's doing. Mika Brzezinski is one of the most fearless women I've ever encountered and he's one of the most fearful men I can think of in our public life."