James Comey trolls Trump: 'I take the president at his word — I was fired because of Russia' 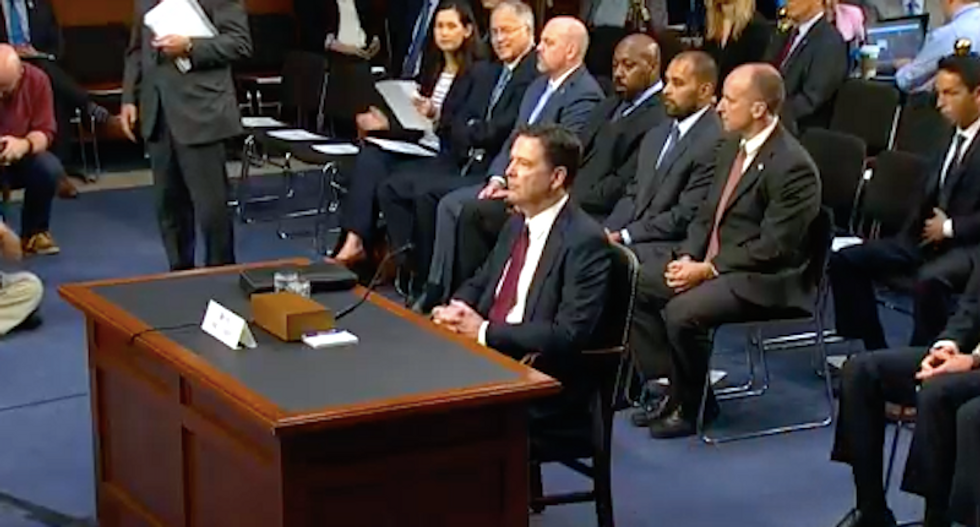 Sen. Dianne Feinstein (D-CA) asked the former FBI director why he believed the president had fired him -- and Comey pointed to Trump's own public statements.

"I take the president at his word — I was fired because of the Russia investigation," Comey said.

He testified the president had expressed hope that the investigation of disgraced national security adviser Mike Flynn would stop, which Comey took as a directive.

But Comey told Feinstein that he was not strong enough in the moment to push back on Trump's request and instead agreed that Flynn was "a good guy."

Comey then reminded lawmakers that Trump claimed on Twitter that their private Oval Office conversation might have been recorded.

"I seen the tweet about tapes -- lordy, I hope there are tapes," he said. "I remember saying, 'I agree he is a good guy,' as a way of saying I'm not agreeing with what he asked me to do. Again, maybe other people would be strong in that circumstance. That's how I conducted myself. I hope I never have another opportunity, maybe if I did it again I would do it better."

The day after the Kansas City Council approved legislation that could reimburse city employees who need to travel to have an abortion — and after St. Louis began pursuing similar legislation — Missouri Attorney General Eric Schmitt called the efforts “plainly illegal.” Kansas City’s ordinance, which passed 10-2 during Thursday’s meeting, could reimburse city employees for health care-related travel expenses outside of Kansas City. The legislation approved Thursday directs the City Manager Brian Platt to negotiate with Healthcare System Board of Trustees on the city’s insurance plans. Any chang...