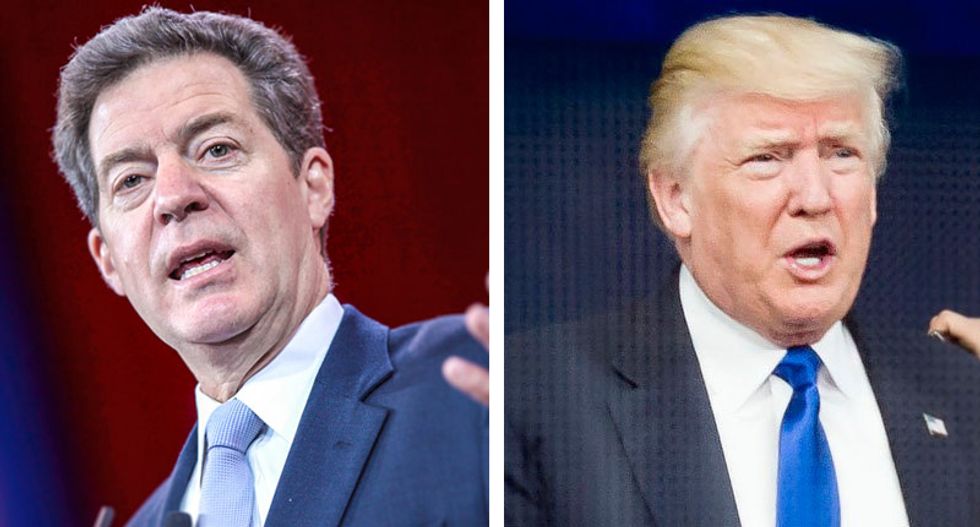 Another red state is beginning to notice the policies proposed by Republicans are leaving many in their state high and dry.

A recent commentary by the Topeka Capital-Journal editorial board blasted President Donald Trump and Gov. Sam Brownback for "disregarding the needs of rural Kansans."

While Trump has attacked the Republican House health care bill as lacking "heart," The Capital-Journal he and Brownback seem to lack "heart" for those living in rural communities.

Cottonwood Falls, Kansas is the largest city in Chase County with 877 residents and voted for Trump by 71.8 percent. Resident Christy Davis was in a meeting after the town did surveys to understand what was needed to help residents and grow businesses. The number one request was a laundry mat, so she started one. "I thought, ‘This isn’t rocket science. Someone should do that,’” she said.

Such "quality of life businesses enable a rural community to continue to thrive so the residents don’t have to travel great distances to get core needs satisfied," said Entrepreneurship NetWork Kansas president Erik Pederson.

But cuts to programs and reduced access to "core" services like these are making life increasingly difficult in rural America. "The administrations in Washington and Topeka are failing to address it," the op-ed outlines.

Trump's budget wants to gut the Department of Agriculture, nixing $28.5 billion for crop insurance that helps farmers when drought, fires, severe weather or other circumstances destroy crops. The cuts are more than a third of a reduction, something "President Barack Obama never even came close to proposing," the paper said.

Sen. Pat Roberts (R-KS) initially poopooed the idea, saying it was "not viable" and "very troubling." He pledged that he “will fight to ensure farmers have a strong safety net.”

"If they're not listening to Pat Roberts, that ought to really have everybody scratching their head," Sen. Claire McCaskill (D-MO) said.

“We’ve had a freeze, and we’ve had a historic prairie fire, and then we had another freeze and we’ve lost about 40 percent of the wheat crop. How on earth are those farmers supposed to stay in business without crop insurance?” Roberts explained about the cuts.

It isn't merely the agriculture community that would be hit by Trump and the Republicans, however. There are also drastic cuts to all funding for the Essential Air Service, which gives incentives to 170 rural airports.

"This would detach rural communities from the rest of the country, which would have harmful economic effects on millions of Americans," The Capital-Journal wrote.

“The ability to keep rural America alive and well revolves around our ability to connect to the rest of the world. That air service matters,” said Sen. Jerry Moran (R-KS) after the budget came out.

To make matters worse, the Senate version of the Republican healthcare plan would dramatically cut Medicaid by as much as $834 billion. Hospitals in rural America have already struggled to stay open and these cuts could seal their fate.

"In Kansas, we’ve already witnessed the impact that Medicaid (or a lack thereof) can have on our hospitals," the op-ed outlined. Kansas was one of the states that refused to expand Medicaid under Obamacare. "When an Independence hospital closed in 2015, administrators said the lack of Medicaid expansion was a critical blow."

A 2016 study from iVantage Health Analytics found one-third of rural hospitals in Kansas are nearing closure. The story isn't unique to Kansas, either. Rural hospitals closing is more common among states that refused to expand Medicaid and fought Obamacare. Kansas lost out on $1.8 billion in federal funds since 2014 fighting the ACA, the Kansas Hospital Association said.

"From laundromats to hospitals, the needs of rural Kansans can no longer be ignored," The Capitol-Journal urged.