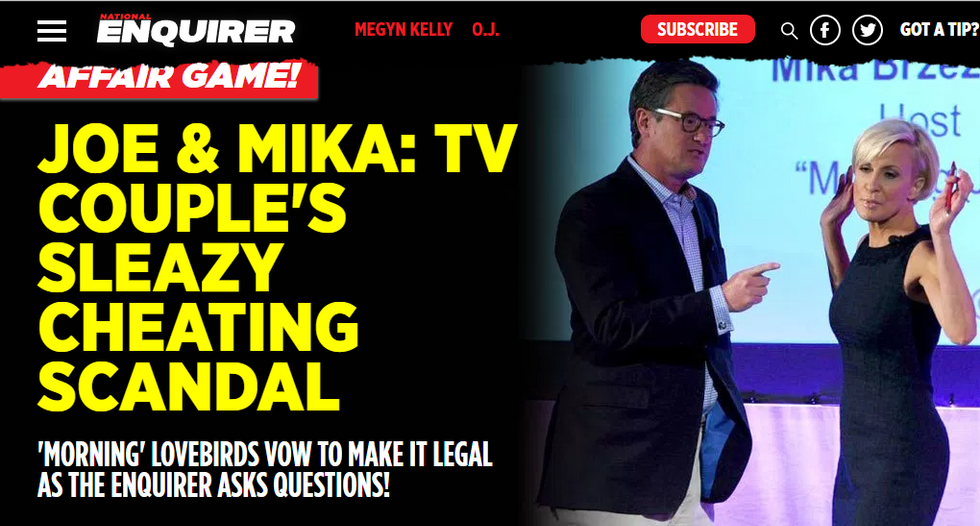 On Friday morning, Morning Joe co-hosts Joe Scarborough and Mika Brzezinski revealed that the Trump White House had told them that a negative story about them would run in the National Enquirer unless they personally apologized to President Donald Trump for their negative coverage of his presidency.

Just hours later, the Enquirer has promoted a salacious story on its homepage about the couple that contains alleged details of past infidelity to their former spouses.

The story -- which is headlined "Joe & Mika: TV Couple’s Sleazy Cheating Scandal" -- was published back on June 2, and was given fresh prominence in the wake of the couple's revelations about the White House's role in the story.

In a Washington Post editorial published Friday, Scarborough and Brzezinski revealed that the White House earlier this year contacted them about a scandalous story that would soon be published in the National Enquirer, whose boss David Pecker is a longtime Trump ally.

“This year, top White House staff members warned that the National Enquirer was planning to publish a negative article about us unless we begged the president to have the story spiked,” they revealed. “We ignored their desperate pleas.”

Trump responded to the allegations on Twitter by saying that Scarborough was the one who called Trump on his own initiative to beg him to kill the story -- but Trump refused.

Scarborough quickly shot back and said that he had copies of the text messages sent from White House aides to back up his case.

For its part, the Enquirer on Friday denied that it coordinated with the Trump White House while it was reporting its story.

"At the beginning of June, we accurately reported a story that recounted the relationship between Joe Scarborough and Mika Brzezinski, the truth of which is not in dispute," the publication wrote. "At no time did we threaten either Joe or Mika or their children in connection with our reporting on the story.  We have no knowledge of any discussions between the White House and Joe and Mika about our story, and absolutely no involvement in those discussions."