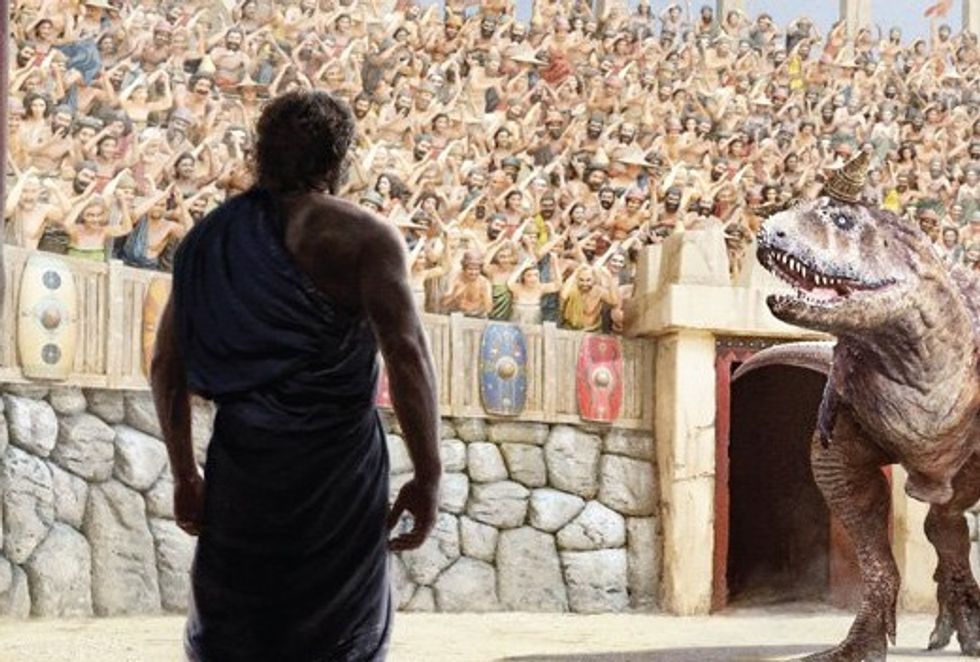 Cover artwork for the book 'Noah: A Man of Resolve.'

Creationist Ken Ham has long drawn ridicule for his insistence that Noah brought dinosaurs with him on his ark -- and now he's promoting a book that shows the Biblical hero squaring off against a tyrannosaurus rex.

Via Patheos, Ham's Answers in Genesis website is promoting a book titled Noah: Man of Resolve  whose cover art features Noah standing off against a tyrannosaurus as onlookers in a Colosseum cheer on their battle.

Despite featuring a giant dinosaur on its cover, the book's description doesn't once mention any battles between Noah and prehistoric creatures.

"After years of serving God, Noah reaches crisis of faith due to his mounting frustrations with the proliferation of sin and the apparent silence from the Creator," the description reads in part. "Thrust into a series of perilous situations, Noah's deepest convictions are challenged. His response will direct his course and change the world forever."

Ham in the past has claimed that dinosaurs were not only present on Noah's ark, but also that they fought in gladiator battles against both humans and a race of biblical giants described in Genesis.

Noah: Man of Resolve was written by authors Tim Chaffey and K. Marie Adams, and can be bought through Ham's website for $12.99.