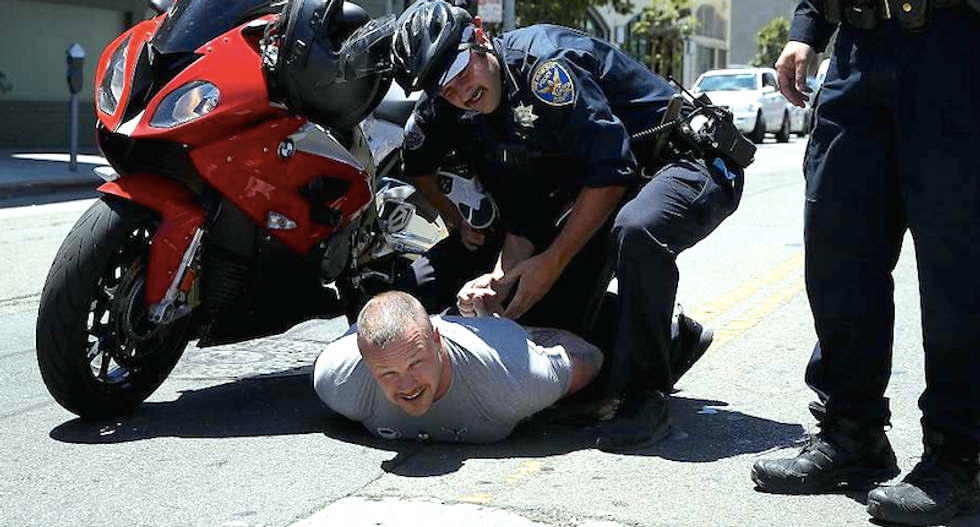 A member of the "White Privilege Club" social media group was arrested for attempting to run over Trumpcare protesters in San Francisco with his motorcycle.

The motorcyclist drove at high speed directly at a group of demonstrators staging a "die-in" Wednesday afternoon to protest the Republican health care reform bill, reported the San Francisco Chronicle.

Some of the protesters were lying down, blocking Seventh Street near Mission Street for about seven minutes, when the man turned the wrong direction down a one-way street and drove directly toward them.

"He was revving and revving, he was gunning it, aiming at people who were laying down," said witness Tracey Brieger, of Emeryville.

Demonstrators rolled out of the way, and the motorcyclist turned around and drove back toward them from the opposite direction.

"If you want to go to the hospital, here you go," he yelled, according to witnesses. "You will have health care if you people stop protesting."

The motorcyclist was quickly surrounded by police, who pointed weapons at him and ordered him off the motorcycle.

"You guys were blocking the intersection and now you’re not -- see how that works?" the man said after he was detained, according to witnesses.

Police did not identify the man, but the motorcycle shown in photos of the incident is registered to San Francisco resident Jeffrey Dillon -- who is seen posing with the same red 2015 BMW motorcycle on social media.

"This isn’t a racist site/group, it is the exact opposite," Dillon says in one post. "It is a celebration of our culture and who we are."

"I am proud of who I am and my people,” he added. "The media and these social justice warriors are going to try to shame us with the words ‘white privilege,’ well we will throw it right back at them and wear it as a badge of honor."

Dillon's posts have since been deleted, but the Hoodline blog quoted another post insisting he's not racist.

"Yell 'White Pride' and people look at you like ive got a clan outfit on. I married a slant eye import, so you know i aint racist," Dillon wrote, punctuated with a winking emoticon.

Police did not say what charges, if any, the man would face in connection with the incident.

Republican lawmakers in several states, including North Carolina, North Dakota and Tennessee, have introduced legislation to protect drivers from civil liability if they hit protesters with vehicles.