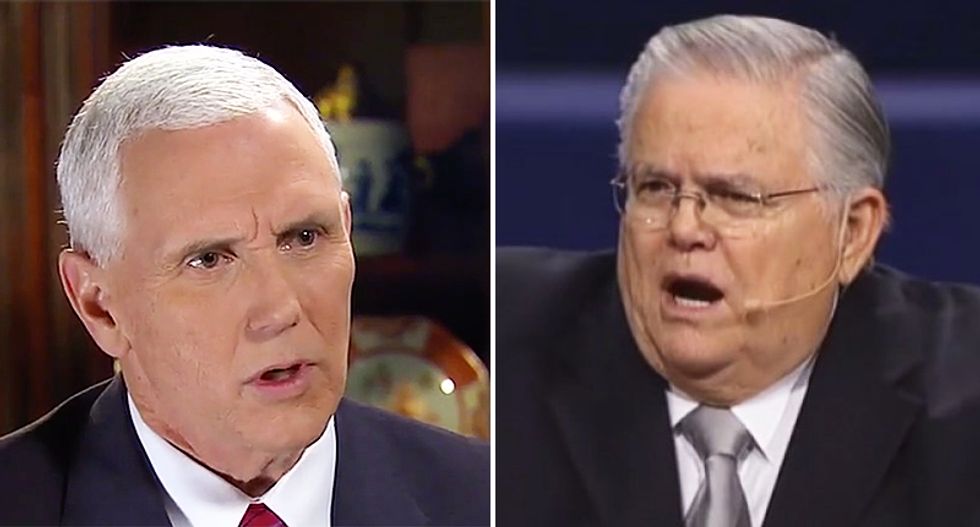 Vice President Mike Pence next month will address Christians United for Israel, a group founded by megachurch Pastor John Hagee, who once said Hitler was a “hunter” sent by God to expedite the return of Jews to Israel.

According to Right Wing Watch, Pence has signed on to speak at Christians United’s annual gathering in Washington D.C., after Hagee supported the president and vice president throughout the 2016 presidential election.

Hagee made the remarks in a 1990s sermon uncovered during the 2008 presidential election—which prompted then-candidate John McCain to disavow the prominent evangelical.

“‘And they the hunters should hunt them,’ that will be the Jews,” Hagee said in that sermon, which he later apologized for. “ ‘From every mountain and from every hill and from out of the holes of the rocks’—If that doesn’t describe what Hitler did in the holocaust you can’t see that.”

“Theodore Herzl is the father of Zionism,” Hagee continued. “He was a Jew who at the turn of the 19th century said, this land is our land, God wants us to live there. So he went to the Jews of Europe and said ‘I want you to come and join me in the land of Israel.’ So few went that Hertzel went into depression.”

“Those who came founded Israel; those who did not went through the hell of the Holocaust,” he added. “Then god sent a hunter. A hunter is someone with a gun and he forces you. Hitler was a hunter.”

Pence’s boss, Donald Trump has pledged support for evangelical Christians. Last week, the president spoke at the Christian conservative nonprofit Faith and Freedom Coalition, arguing “It is time to put a stop to the attacks on religion.”

“We will end the discrimination against people of faith. Our government will once again celebrate and protect religious freedom,” he said, later adding he and his evangelical audience are “under siege.”