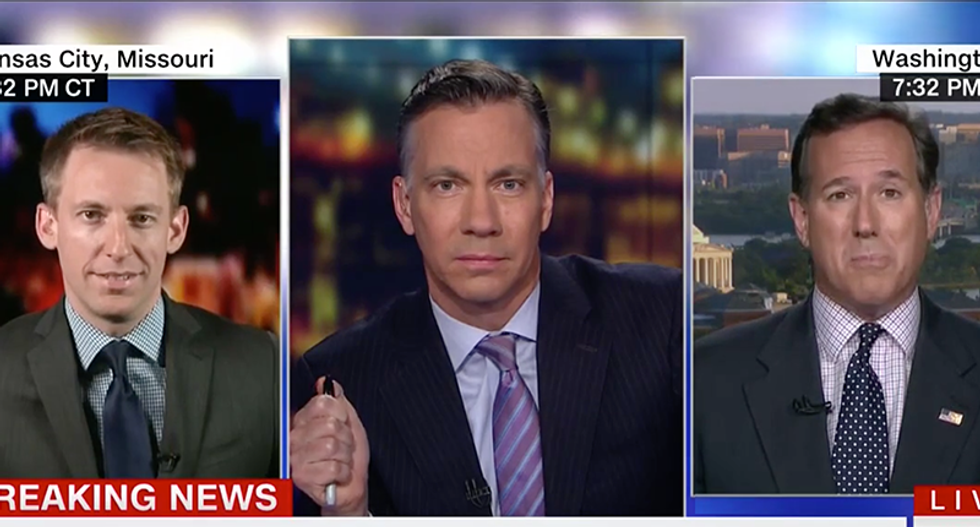 Former Sen. Rick Santorum (R-PA) believes so firmly in voter fraud that he wants to see Secretaries of State run sting operations uncover whether or not there is voter fraud. There's just one problem — doing so would require an official to commit a felony.

"You know, to the previous report that there is no evidence of voter fraud, that's just ridiculous," Santorum told Jim Sciutto. "There is all sorts of studies been done about non-citizens signing up to vote. In California it's easy."

Sciutto rattled of the 0.0002 percent of cases in which someone illegally signed up to vote.

"Well, look, the bottom line is there has never been really good studies," Santorum claimed. "Jason [Kanear] was the Secretary of State. Did you ever really test to see whether people could vote illegally? Did you send them into voting places and see if they could vote under dead people. The city of New York did and they found out 97 percent of the people that tried to vote illegally were able to vote illegally. So, I don't think it's done very much. I don't think people check."

"I conducted more elections investigations than any Secretary of State in the history of my state, and there has never been a case of voter fraud in Missouri," Kander told Santorum. "You are more likely to be struck by lightening as an American than to commit voter impersonation fraud."

He went on to blast the request for information as nothing more than politically motivated voter suppression.

"The purpose of this commission, or the most recent request, is to figure out who you voted for so they could determine whether or not to push you off the voter rolls," Kander said. "There is no good explanation for why they would request your political party as part of this information. What's happening here is that this all started with the biggest lie that a sitting president has ever told and now in order to try to validate that, try and justify that insane action, they are taking insane action after insane action. you mentioned the Mississippi Secretary of State. He came to Missouri in 2012 and campaigned against me. This is not a liberal we're talking about. This is a person who is saying under no circumstances are you going to get this information about my voters."

Santorum demanded to know whether Kander did such a "sting operation," the problem, however, is that doing so would not only be illegal it would require additional laws be broken. Missouri has strict voter I.D. laws that require voters bring a state or federally issued I.D. to the polls.

Falsifying any of these forms of identification would be at a minimum a misdemeanor and in some cases a felony. As a graduate of the Dickinson School of Law, Santorum should not only know that fact but he should also think twice about solicitation to engage in criminal conduct.

Many states are refusing to turn over their information, including the voter fraud commission chair Kris Kobach.