‘Sean got fatter’: Steve Bannon insults Spicer to explain why press secretary does briefings off camera 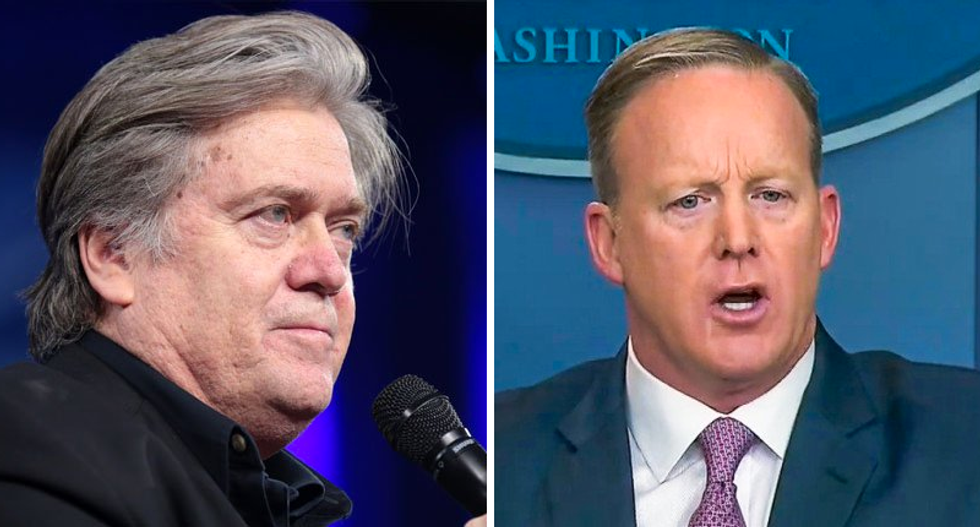 The ongoing feud between Steve Bannon and the White House staff members of the Republican establishment is heating up again.

Monday, Spicer held a press briefing but prohibited any filming or taping of the information, drawing the ire of The White House Correspondents Association, which demands White House transparency.

Trump has been seemingly frustrated with Spicer since his portrayal by actress Melissa McCarthy on "Saturday Night Live." Trump was reportedly not angered by the mockery of Spicer but that he was depicted by a woman.

The daily drama of the White House infighting revealed that Spicer, a devout Catholic, was furious he wasn't allowed to attend the White House meeting with Pope Francis. CNN's David Chalian described it as being emblematic of a kind of cutthroat, “who’s up, who’s down” atmosphere that Trump has fostered in the White House.

The last time Spicer did a combative briefing it didn't go well.

“Spicer wanted to do it, and Trump was good with it. I’m not sure how often he’ll do it from now on, but today was to give the middle finger to you guys,” a Republican close to the White House told Politico.

There has been ongoing speculation for weeks that Spicer was about to be fired or replaced and deputy Sarah Huckabee Sanders claimed he was taking on additional roles after the resignation of Communications Director Mike Dubke.

The White House decided that Spicer's daily briefing is back on as of Tuesday at 1:30 p.m. EST. It's been eight days since Spicer has held an on-camera briefing. Trump hasn't had a press conference since February and does not take questions from reporters.