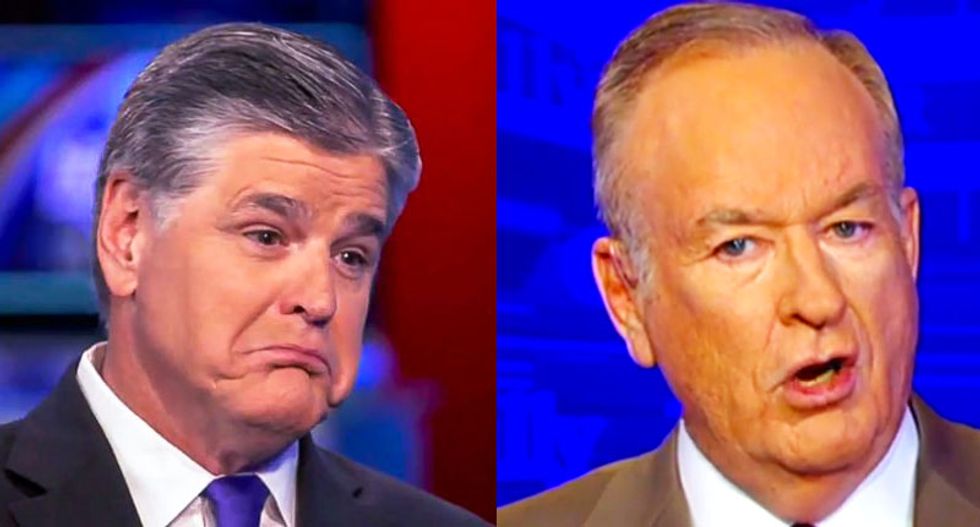 Roiled by the departures of former CEO Roger Ailes and ratings star Bill O'Reilly, Fox News is facing an uncertain future as ratings slip for the first time in decades and viewers migrate to other platforms.

Vanity Fair's Sarah Ellison wrote that the departure of rising star Megyn Kelly for NBC has further dispirited the "Leftovers" at Fox.

The warring factions within the network mirror a generational gap between NewsCorp CEO Rupert Murdock and his sons, James and Lachlan. Murdoch Senior represents the old guard within the company, who want very much to put the last year's ugly scandal headlines behind them and soldier on.

James and Lachlan -- long "embarrassed" by Fox's right-wing bias and the exposure of the company's frat-house culture of sexual harassment and racial bullying -- represent a reformist movement within the company, which wants to shed its right-wing past and be taken more seriously as a journalistic organization.

The old guard were dealt a serious blow last week when -- for the first time in decades -- Fox News slipped to third place for viewer numbers in key demographics. The shine quickly wore off O'Reilly's replacement Tucker Carlson who, after a spate of good numbers, has seen his ratings dive through the floor.

In spite of its scandals in 2016, Fox was able to remain a ratings juggernaut, dominating the coveted 25 to 55-year-old demographic as it has since the 1990s. In 2017, however, ratings at CNN and MSNBC have surged, with MSNBC host Rachel Maddow seizing the 18 to 25 crown and trouncing both Fox News and CNN.

O'Reilly was long Fox's main draw, the network's angry id, dominating the 9 p.m. time slot for the bulk of his 20-plus years at the network. His dismissal on grounds of serial sexual harassment and bullying of female network personnel may be the hull breach from which Fox News as we currently know it cannot recover.

Sean Hannity has assumed the mantle at the network's star player, but his refusal to stop meddling in the death of Democratic staffer Seth Rich and the conspiracy theories around the murder have made his relationship with the company rocky and transformed him into an object of derision for other media figures, even Republican stalwarts like Joe Scarborough.

The ratings stumbles have sent shock waves through the company.

“They are feeling the pinch,” said an "industry insider who used to work for Ailes" to Ellison. “They are trying different things with no real leadership, and trying to see what can stick.”

The power players at the network are "rolling their eyes" at Hannity, the insider said, but they know that to lose him at this juncture would be "a disaster" for the network.

Furthermore, the network is facing stiff competition from outlets like Breitbart.com, Alex Jones' conspiracy hub InfoWars and the rapidly expanding Sinclair Media, which now controls nearly as many local stations as Fox and is looking to purchase Tribune, Inc., which --if successful -- would be "a company that will come close to matching Fox, if not exceeding it in terms of coverage and distribution,” said former Fox News vice president Joel Cheatwood.

Meanwhile, the so-called "Leftovers" at Fox console themselves with taking pot shots at Kelly, whose NBC debut this week featured an interview with Russian President Vladimir Putin.

"Her hair was too beachy, one told me; her makeup too flat," Ellison said.

“No one wishes her ill will,” another Fox employee said. “But I didn’t read any good reviews of her performance, let’s just say that.”