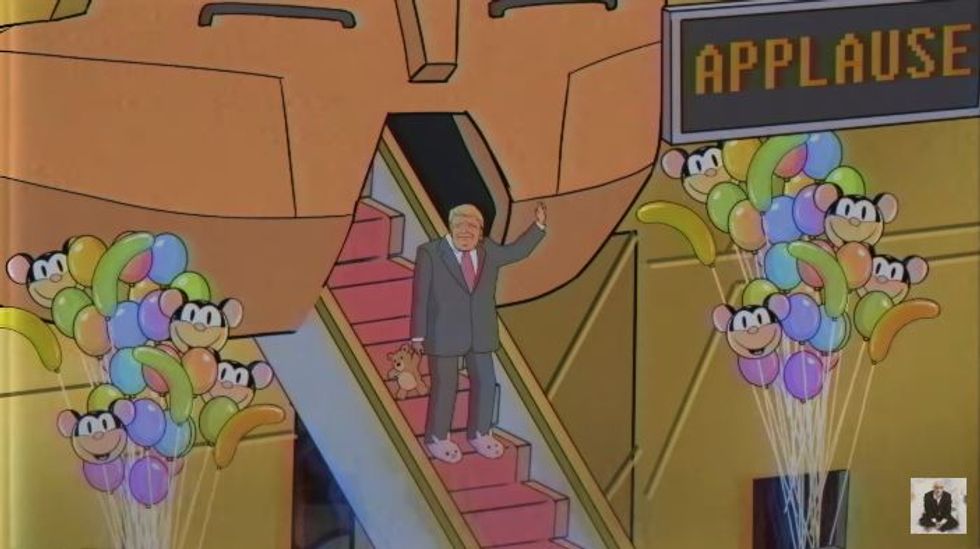 Electronic artist Moby's new animated music video sends a clear message about his feelings on capitalism, greed, and President Donald Trump -- and the latter's supporters aren't having it.

Once Trump supporters caught wind of Moby & The Void Pacific Choir's "In This Cold Place" video, they began drawing their own conclusion about the artist's activist message.

"Moby cartoon video corrupting children into hatred and accepting violence against President Trump" reads the headline of a post at the American Thinker blog decrying the "Trump derangement syndrome" apparent in the satirical cartoon.

"The artistic quality and budget of this video overshadow anything Hamas could produce.  But as I see it, Moby and Cutts are breeding fanatics, just as the Palestinians do," American Thinker's Thomas Lifson wrote.

Breitbart focused on the dollar-turned-swastika symbolism in the video, as did the conservative Washington Times, who noted that Trump "transforms into a robotic, missile-firing swastika" during the three-minute animated video.

On Twitter, things heated up even more as users like Infowars editor Paul Joseph Watson calls it "laugh out loud funny" and claims the video is "like virtue signaling and hysteria had a baby."

Linking to the Breitbart article, one Trump-supporting user claimed they are "STILL waiting for a democrat to explain exactly HOW 'Trump is a fascist Nazi.'"

Read some of the best Trump supporter reactions to Moby's satirical video below, as well as the video via Moby on Youtube.

@PrisonPlanet #liberals will pretend to like #Moby music because it is irrational hatred toward #Trump which is the… https://t.co/K0iMPQIb5v
— Are You Liberal? (@Are You Liberal?) 1497972817.0