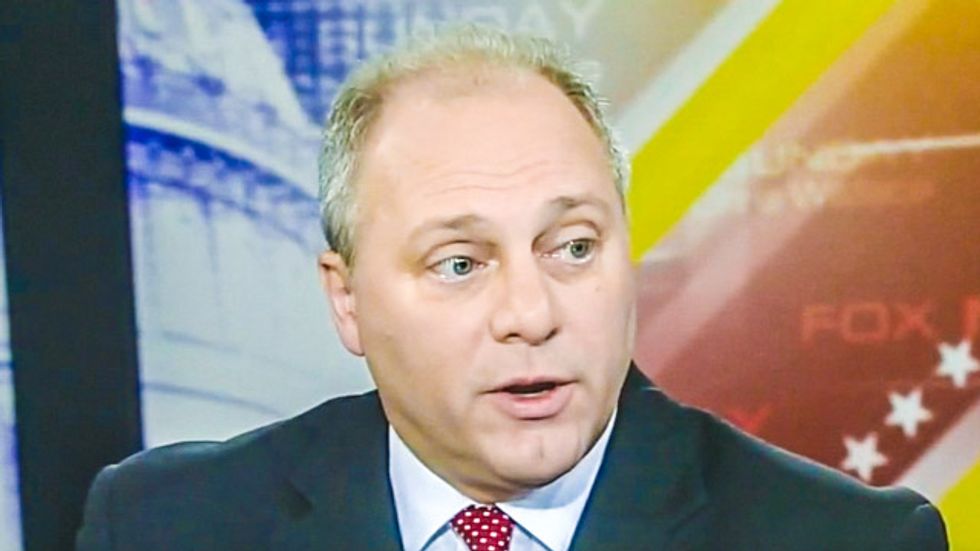 Reports have emerged of a mass shooting that occurred at the Republican congressional baseball team's early morning practice on Wednesday.

Rep. Mo Brooks (R-AL) told talk show host Matt Murphy that Republican Whip Steve Scalise (R-LA) and at least four other people were hit by gunfire on Wednesday morning while practicing at a field in the Del Rey neighborhood in Alexandria, Virginia.

Scalise was shot in the hip and is in stable condition.

In addition to Scalise, CNN confirms that two Capitol Hill police officers were also shot. Alexandria police say that they have apprehended the suspect and that he is no longer a threat.

Brooks appeared on CNN to describe how he was on deck waiting to bat during the practice when he heard gun shots. He described how the shooter was subdued, but only after he shot at least five people. Brooks and his colleagues then rushed into the outfield to assist Scalise, who had left a "trail of blood" while he dragged himself from second base to the outfield.

Brooks said he got a look at the gunman and described him as a white male who was "a bit on the chubby side." Sen. Jeff Flake (R-AZ) subsequently told CNN that the shooter was a white male in his 40s or 50s.

Alexandria Police Chief Michael Brown said that his officers arrived on the scene within three minutes of people called, but wouldn't give any other information about the shooter. He confirmed that five people were transported medically from the scene.

Scalise was taken to MedStar Health in Columbia, Maryland, where he underwent surgery to treat his wound.

Sen. Rand Paul, who was also at the practice, told MSNBC that he heard between 50 to 60 shots fired by the gunman. He said he believed the shooter was using an AR-15-style rifle.

"Everybody would've died except for the fact that Capitol Hill police were there," Paul said.

President Donald Trump released a statement saying that he was "deeply saddened by this tragedy" and that he offered "thoughts and prayers" to everyone who was affected by the shooting.

Rep. Steve Scalise of Louisiana, a true friend and patriot, was badly injured but will fully recover. Our thoughts and prayers are with him.
— Donald J. Trump (@Donald J. Trump) 1497444506.0

Watch live video coverage of the shooting below.