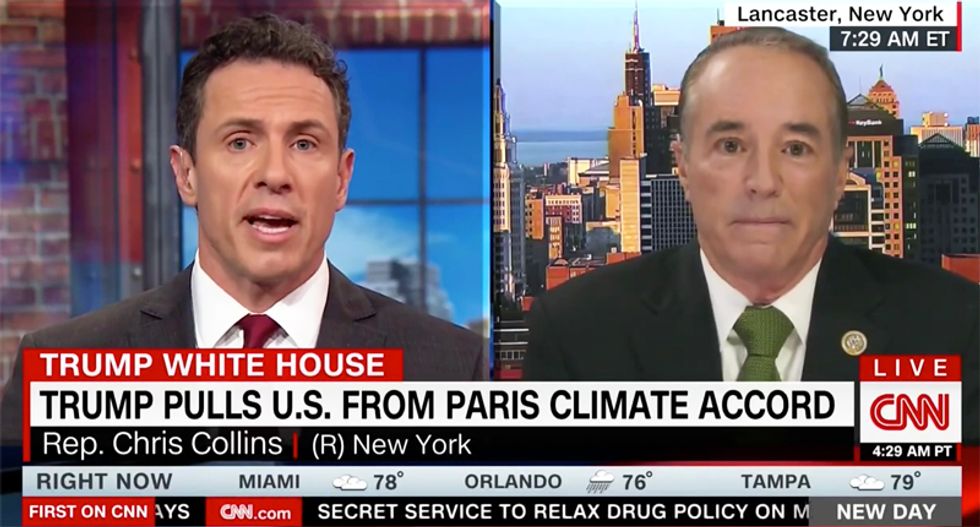 Appearing on CNN's New Day with host Chris Cuomo, one of the President Donald Trump's earliest supporters claimed there was "no need" for a new environmental agreement to replace the Paris Accord before offering up a baffling description of environmental science that is completely at odds with scientific consensus.

Speaking with host Cuomo, Rep. Chris Collins (R-NY) defended the president decision in the contentious interview, saying, "This was not agreement on the science behind global warming. This was a bad deal for the United States."

"On global warming," Cuomo asked. "That is what this was about. International recognition of a recognized problem by all. We have problems with greenhouse gasses and we all need to address it. Do you accept that premise?"

"Well, I do accept it," Collins replied. "I traveled to the Arctic Circle a week ago to meet with the scientists. We discussed this in great depth. They pointed out that most of the models they put out there are not playing out for a variety of reasons. There is a some level of warming. With that we are getting more vegetation, and the vegetation is absorbing the CO2 at rates which were not expected."

"We did not use those terms," Collins deflected. "We tried to stay away from the political terms."

"We talked about hard numbers, the numbers are not going up the way they were predicted," Collins continued. "At some point, you know, we have all kinds of climate change issues going on. We need jobs. We need to focus on jobs."

"I don't know why you have to deny science to make jobs," Cuomo shot back. "I don't get it. You can dance if you want, but no scientist told you there is not a global warming problem."