'A meme is born': Watch Kellyanne Conway use visual aids to explain why there's no Trump-Russia collusion 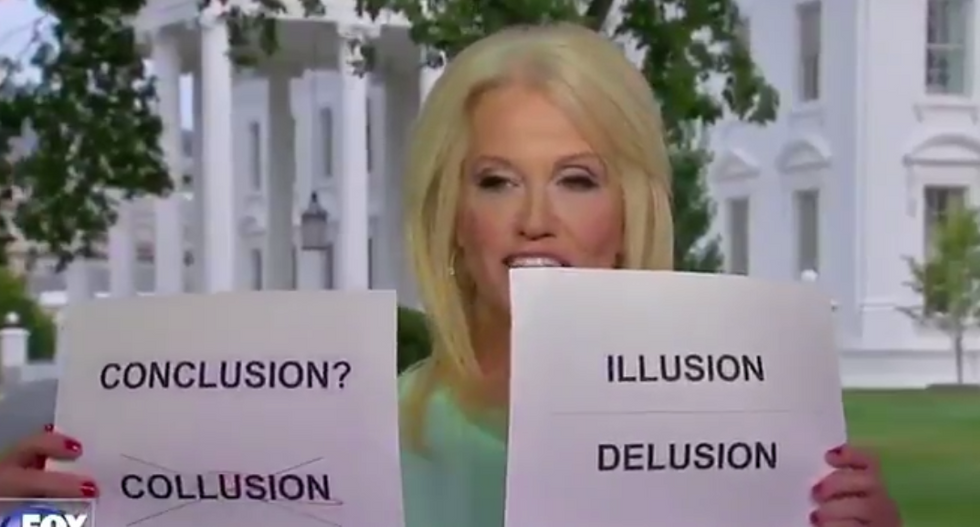 In an interview with Sean Hannity on Wednesday, counselor to the president Kellyanne Conway brought along some very important visual aides to “help all the people at home” dissect what’s really going on with Donald Trump and the Russian government.

To recap: On Tuesday, Donald Trump Jr. released a series of emails (circa June 2016) that showed he willingly accepted a meeting with a Russian emissary after being promised information detrimental to then-Democratic candidate Hillary Clinton.

If Trump Jr.’s version of the events are to be believed, nothing came of that meeting, and the president’s eldest son was in fact pretty bummed that his nefarious exchange with a Russian lawyer yielded nothing of substance for the campaign.

Investigators are now probing that get-together—which was also attended by Trump’s former campaign manager Paul Manafort and top Trump adviser/favorite son Jared Kushner—as part of the ongoing investigation into possible collusion between the Trump campaign and Russian operatives hoping to impact the 2016 election.

Now, the ins-and-outs of Trump associates’ various connections to Russia make even a highly-engaged political observer’s head spin. Which is presumably why Conway brought along her helpful props to explain why—despite all evidence to the contrary—the only “conclusion” one can reach is not “collusion” but “illusion and delusion.”

Watch the video for yourself:

This just happened on Hannity..... pic.twitter.com/nOYn7Th2aL

And now for some reactions!

Kellyanne Conway is a timely reminder that you can have no sense of humor and still be in on the joke.
— John Levenstein (@John Levenstein)1499917707.0

More than 150 students and graduates from Patrick Henry College signed a letter during Cawthorn's campaign calling the 25-year-old a sexual "predator," but the state GOP hasn't taken any steps to censure the staunchly pro-Trump freshman lawmaker, reported the Washington Post.