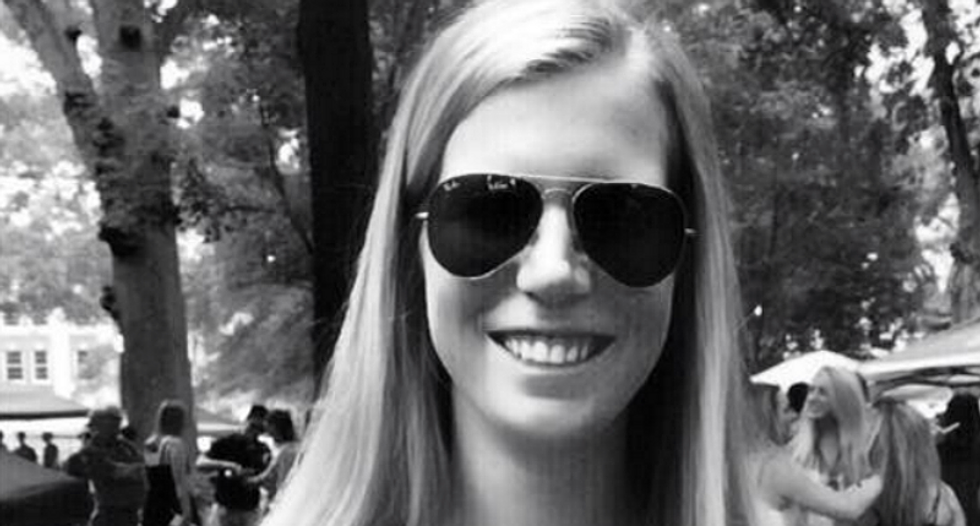 Megan Rondini was 3.8 GPA student accepted into a special MBA program for high achievers in STEM fields who worked after class at a lab studying Alzheimer's disease.

The parents of an Alabama college student who killed herself after accusing a wealthy Tuscaloosa man of rape have filed a lawsuit against her alleged rapist, university employees and law enforcement officials.

Megan Rondini, a 20-year-old honors student at the University of Alabama, hanged herself in February 2016 after claiming mistreatment by investigators, and her parents have filed a wrongful death suit against them in federal court, reported AL.com.

Rondini claimed she was sexually assaulted by T.J. Bunn, Jr., of the ST Bunn Construction family that claims to have paved every street in Tuscaloosa, at his "ornate mansion decorated with his choicest hunting conquests" in July 2015 after blacking out at a bar where she had encountered the 34-year-old.

She escaped the home through a second-floor window and met with law enforcement immediately afterward, but Rondini felt investigators cast her as the criminal and Bunn -- known as "Sweet T" -- as the victim.

Under Alabama's rape law, victims must prove they "earnestly" resisted their attackers, and the investigator who interviewed Rondini determined that she hadn't fought back against Bunn because she had not kicked or hit him, according to Buzzfeed.

That investigator then began questioning Rondini about alleged crimes she had committed, and she was later told she could escape prosecution for them only by dropping a civil suit against Bunn.

Rondini couldn't even get counseling through the university, because a staff therapist told her she was friends with the Bunn family, and a second counselor refused to see her until she took anxiety medication.

The honors student withdrew from the university in the fall of 2015, fearing for her safety, and took her own life several months later.

"When all is said and done, I wonder what I could've accomplished if one man didn't completely rip everything away from me," she said in a text message shortly before her suicide.

The suit claims authorities sided with Bunn's version of events and did not follow up on Rondini's allegations, and faults the investigating officer for seeming more interested in determining whether she had broken any laws the night of the rape.

The university then "deliberately and repeatedly denied services and mishandled accommodations with hostility toward" Rondini, the suit claims.

The suit also claims the university allowed Bunn to visit the campus, where she saw him walking and spotted his car parked outside her apartment.

"The combined trauma due to Megan's treatment by the Tuscaloosa Sheriff's Department, the reporting process with UA, the additional anxiety of trying and failing to receive counseling as a result of her rape, and the influential position of her assailant in the community ultimately made Megan feel unsafe on campus and that she could no longer remain at UA," the lawsuit claims.

Bunn's attorney told AL.com that the suit was "baseless," and he said the case had been properly investigated and resulted in no charges against his client.

An attorney for Rondini's parents said the suit was intended to prevent similar cases after the family and the university completed a mediation process.

"The Rondini family is not in this for the money, they are only interested in shining a bright light on a tragic yet preventable situation," attorney Leroy Maxwell Jr. said in a statement. "The court will determine if this case rises to the level of punitive damages."