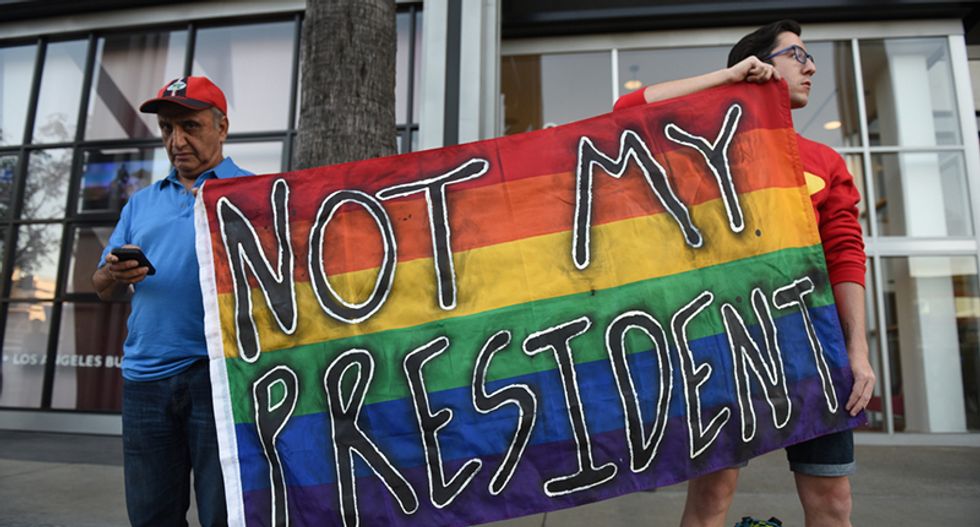 President Donald Trump pledged that as president he would "do everything to protect our LGBTQ citizens against violence and oppression." Yet, Wednesday, Trump decided that transgender people were no longer welcome in the U.S. armed forces.

Trump famously told supporter Caitlyn Jenner that she could use any bathroom she wanted in Trump Tower. Now, it seems, she can use the bathroom in Trump Tower, but she's not welcome in Trump's military.

Under the Obama administration, Secretary of Defense Ash Carter decided to begin to look at this issue and the medical treatment trans service members would be going through and how to do it. He announced in June 2016 "that transgender individuals will now be able to openly serve in the U.S. armed forces."

The internet and LGBTQ activists were furious with Trump's decision. Taking to Twitter, many blasted the president for lying to Americans during the 2016 campaign in which he pledged equal protection under the law for all LGBTQ citizens. Ironically, the day marks the anniversary of Executive Order 9981, in which President Harry Truman integrated the U.S. armed forces.

Okay, I am not sad that trans people will no longer serve in a military that does this idiot's bidding. But still .… https://t.co/IRuxezZ9Iy
— ArielTroster (@ArielTroster) 1501075765.0

@realDonaldTrump I know transgender service members and vets who have done more to serve their country than… https://t.co/OMcHeaU6gR
— Chad Griffin (@Chad Griffin) 1501075516.0

1. Banning any qualified person from serving their country, because of who they are is both discriminatory and bad national security policy.
— Ruben Gallego (@Ruben Gallego) 1501075946.0

3. It is also ironic that @realDonaldTrump who did everything to avoid Vietnam is stopping Trans people who want to serve.
— Ruben Gallego (@Ruben Gallego) 1501076296.0

4. Lets look what is going on here. @realDonaldTrump is an impotent leader. He is using fear of Trans community to score political points.
— Ruben Gallego (@Ruben Gallego) 1501076568.0

5. Make sense now why @realDonaldTrump admires Putin. Both use fear of LGBTQ community to keep control of their base.
— Ruben Gallego (@Ruben Gallego) 1501077041.0

This is how you honor American heroes? By denigrating their sacrifice, cutting off their livelihoods, and harming their families?
— Laura E. Durso (@Laura E. Durso) 1501076166.0

You started the narrative that Trump was an LGBT ally last April. You were wrong. We knew better… https://t.co/CvCbXjfMsa
— Joe Sudbay (@Joe Sudbay) 1501074869.0

The nerve of a five-time draft dodger blocking Americans who actually do want to serve their country in the military.
— Gabe Ortíz (@Gabe Ortíz) 1501074707.0

Mr. President, transgender soldiers have been fighting and dying for our country IN OUR MILITARY. You should thank them for their service.
— Rep. Ted Deutch (@Rep. Ted Deutch) 1501076361.0

.@realDonaldTrump: A commander & chief shouldn't discriminate against any American who wants to serve in our military. This is disgraceful.
— Gwen Graham (@Gwen Graham) 1501077082.0

We urge everyone to call their federal elected officials and protest this dishonorable and offensive action.
— PFLAG National (@PFLAG National) 1501077226.0

This is discrimination, plain and simple. I stand with the brave transgender Americans who selflessly serve our mil… https://t.co/97GD81fMux
— Kamala Harris (@Kamala Harris) 1501078026.0

ZERO evidence a sniper who is LGBT is less qualified than someone who is LGB or straight. Making America Discrimina… https://t.co/U4sm0rka2C
— Ted Lieu (@Ted Lieu) 1501078349.0

@realDonaldTrump I couldn't imagine anyone turning away such selfless yng ppl because of their gender identity. If… https://t.co/DrZKqA0axI
— Gwen Graham (@Gwen Graham) 1501078326.0

Please note, all that a ban on trans soldiers will do is weaken the military. You should ask yourself why that's Cheeto's plan.
— ❄Mikki Kendall❄ (@❄Mikki Kendall❄) 1501080497.0

Maybe we should be real about the actual cost here. This is just about hurting trans people - and all of us. https://t.co/3jxWEolN9b
— Chase Strangio (@Chase Strangio) 1501080232.0

The ACLU and Lambda Legal are already searching for the lawsuit.

Thousands of trans service-members on the front lines deserve better from their commander-in-chief,… https://t.co/7aGcvpEisB
— ACLU (@ACLU) 1501076611.0