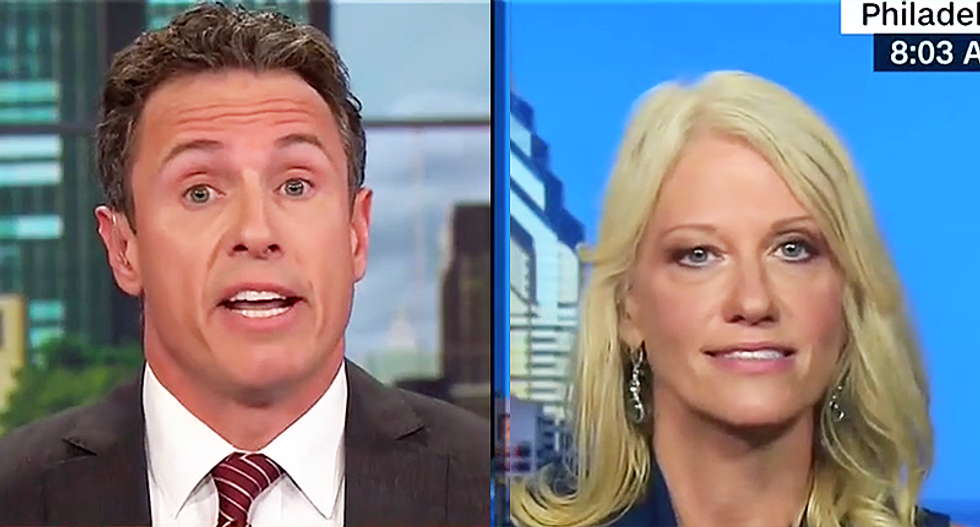 Senior counselor to President Donald Trump, Kellyanne Conway Monday attempted to pivot to accusing CNN of doubting Trump during the G-20 summit instead of addressing the meetings between Paul Manafort and Don Jr. CNN's Chris Cuomo wasn't having it.

"You keep on saying Russia. Who was this woman? Why was she there?" Conway said, continuing to deny it was opposition research.

"This is the word he used," Cuomo said, quoting the New York Times.

"In what context?" Conway said.

Cuomo ultimately put the quote on the screen.

Opposition research is research that is about the opposing campaign. Don Jr. explained that Veselnitskaya approached the Trump campaign, saying that she had information about the Clinton campaign working with the DNC during the primary.

Conway alleged that Cuomo is only talking about this because CNN has been invested in this story for months and that it isn't really isn't that big of a deal. She insisted that the real story of the day is that James Comey revealed classified information, citing a recent report in The Hill.

Cuomo broke in and read the quote from The Hill, revealing that "according to interviews with officials familiar with the documents."

"So unnamed sources are ok for Comey but not for Trump?" Cuomo said.

Conway then tried to bring up something about a G.I. Joe and Hillary Clinton, which Cuomo said he didn't even understand what Conway was talking about. Conway then blasted Cuomo for CNN not covering positive stories about Trump but Cuomo cited Rep. Mo Brooks who appeared before Conway talking about Trumpcare.

"Let's focus on what did not happen in that meeting," Conway said.

Conway then went on to ask why CNN wouldn't report positive stories about veterans instead of covering Russia.

"You can't pick what you like and what you don't like," Cuomo explained. "Don Jr. changed his story... It matters. Period."

Conway again pivoted to asking why CNN refuses to talk about positive things the administration is working on.

A frustrated Cuomo then blasted Conway for her double-speak and hypocrisy, which Conway claimed was his attempt to go viral.

"Tell the American people something else while you're here, that they shouldn't believe all of the White House and surrogates and all your friends that want to destroy the responsible media," he began. Tell them that they shouldn't listen to that stuff, that the media matters and they should judge stories on their face and there's some type of agenda out to get the president... you compromise my ability to reach people with information. When you say whatever you like is fake -- that matters, too. Kellyanne."

"I never used that word," she claimed, saying she's never used the term "fake news." Conway used the term as early as Dec. 4, 2016. Cuomo explained that many in the White House and on Trump's campaign have. "You're doing an infomercial now."

You spun it over to this': CNN's Cuomo hammers... by sarahburris