Fox-Conned: After Trump’s healthcare debacle, next up is fake jobs and fiscal malpractice 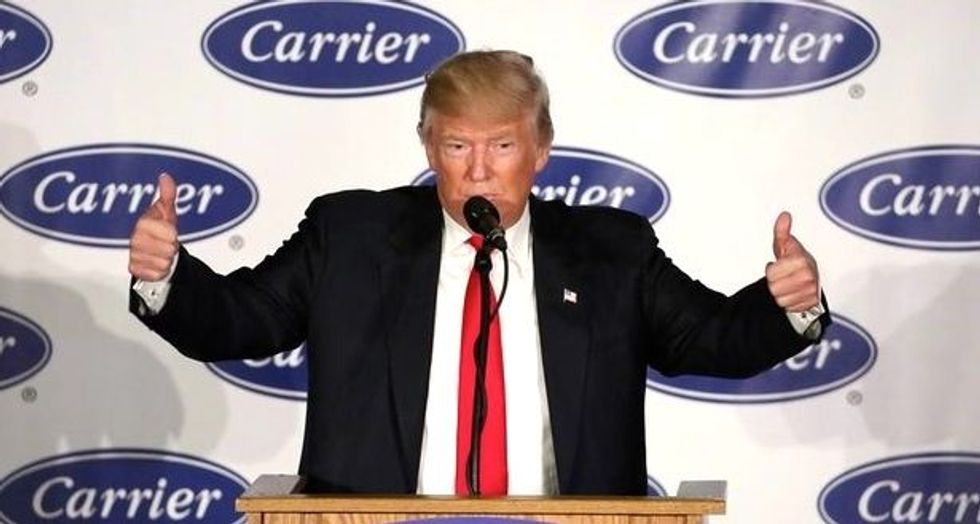 In Donald Trump’s mafioso-style presidency, appearances are reality. Trump courts chaos solely to appear strong and decisive. That was his standard for Trumpcare: getting a win at any cost.

If an early version of the Republican healthcare bill had passed, the Center for American Progress estimated up to 2.9 million jobs would have been lost by 2022. It didn’t matter that the forgotten men and women of Trump’s America would be hammered by cuts to rural healthcare systems overburdened with opioid addicts. It only mattered that Trump could brag that he was the top dog.

That disaster has been delayed — Trump will sabotage Obamacare out of sheer vindictiveness — so it’s on to the next debacle.

That is likely to be tax reform. The scheme is to shower the wealthy like Trump with tax cuts, inching closer to Grover Norquist’s dream of making government so small he can “drown it in the bathtub.”

But despite appearances of unity, Republicans will be hard-pressed to craft a bill that satisfies their warring factions and withstands Trump pissing inside the tent. After six months the right still can’t agree on basics such as new tax rates, while they dropped the border adjustment tax that could have generated $1 trillion of revenue to make up for some of the giveaways.

Then there is Trump’s promise to rebuild America. His “great national infrastructure program” is foundering. With a debt-ceiling impasse looming for the fall, it’s unlikely any plan for rebuilding bridges, waterworks and highways can be introduced before 2018. Except that’s an election year that typically dooms difficult legislation. Even if it did pass, the plan has been termed “fake fiscal news” because it relies on private sector funding that would generate little new infrastructure.

So what does that leave? The fake-jobs shell game Trump has been running since he was elected.

For Trump, the one recent bright spot to his one-man shitshow was the White House ceremony on July 26 where Taiwan-based electronics manufacturer Foxconn announced it will build a state-of-the-art factory in Wisconsin.

Flanked by Foxconn Chairman Terry Gou, Wisconsin Gov. Scott Walker, and House Speaker Paul Ryan, Trump claimed a new plant producing liquid-crystal display panels “will create 3,000 jobs, at a minimum, with the potential for up to 13,000 jobs in the very near future.” Trump also crowed about the $10 billion price tag for the factory.

Wisconsin’s Economic Development Corporation inflated the jobs figure even more, claiming 35,000 direct and indirect jobs would result in the state from the Foxconn project.

Walker added that Wisconsin would fork over $3 billion in tax subsidies over 15 years, or up to $1 million per job.

As usual, the deal reeks of fraud. Since being elected, Trump has brazenly taken credit for jobs and investments announced months or years earlier, as with Ford, Fiat-Chrysler, Exxon-Mobil, Softbank, and Lockheed-Martin.

Or Trump falsifies the number of jobs created, as he did with Carrier when he inflated the jobs saved by 300. Or he ignores job cuts. He gushed over 900 jobs created in Michigan while ignoring 1,100 jobs GM eliminated at the same time in the state, for an actual loss of 200 jobs.

Sometimes companies match bullshit for bullshit with Trump to curry favor. Intel’s CEO appeared by Trump’s side in January 2017 to tout a computer chip factory in Arizona. It’s the same exact factory the previous CEO announced by then-President Obama’s side in 2011 and which then had construction delays as demand waned.

All the numbers about a Foxconn factory in Wisconsin strain credulity. Compared to Foxconn’s $10 billion, Tesla built a new production line for its Tesla 3 for $1.26 billion. Intel’s highly advanced Arizona plant will employ 3,000 workers at a cost of $7 billion. But Foxconn claims it will spend far more, $3.3 million per employee, to make LCDs for computers and television.

Foxconn does pony up big bucks sometimes. On Dec. 30, 2016, it unveiled plans for an $8.8 billion plant in Guangzhou, China, to churn out LCDs. Reuters reported it is one of three new giant LCD manufacturing facilities being built in China.

That is a clue to why the entire plan is fishy.

Weeks earlier, on Dec. 6, SoftBank CEO Masayoshi Son visited Trump Towers to say he would invest $50 billion from a technology fund in the United States, creating 50,000 jobs. Son, the richest man in Japan, first announced a $100 billion global fund in October, before the election, with $60 billion from Saudi Arabia and the United Arab Emirates and $28 billion from Softbank.

However, all the talk of investment and jobs was recycled news from October and even further back. Two weeks later in December Softbank announced its first investment, $1 billion in Florida-based OneWeb employing 3,000. That was old news as well.

In effect, Foxconn is supposed to fulfill Softbank’s entire pledge of 50,000 jobs. The next month, Foxconn’s Gou said the company was considering invest billions in an LCD plant in the United States that would create “30,000 to 50,000 jobs.”

The $10 billion question is why would Foxconn build an LCD factory in the United States when three massive LCD plants are being built in China that could cause a global oversupply?

It makes political sense for Trump. The announcement of a Wisconsin factory could boost Walker, who is facing re-election next year with sagging poll numbers. Ryan is being challenged by a Bernie Sanders-style progressive. And Trump narrowly won the Badger State in 2016 because Clinton failed to campaign there, a mistake the 2020 Democratic nominee will not make.

But it’s Softbank’s Son who is set to make out like a bandit. In 2013, Softbank shelled out $21.6 billion to buy Sprint. It planned to merge with T-Mobile, but Obama’s FCC nixed that plan and Sprint has struggled since. Now Son and Softbank are betting big they can gain approval under Trump for a merger to create a telecom behemoth.

So where does Foxconn fit in? It has numerous business ventures with Softbank, and Gou and Son are long-time partners.

More significant, Foxconn looks to be making promises it never intends to keep. It has a history of announcing investment in other countries and then shattering hopes.

In 2011, Foxconn vowed to invest $12 billion in Brazil and spawn 100,000 jobs. The government gave Foxconn generous tax breaks while setting minimum standards for investment, working conditions, and local sourcing, hoping to spur a made-in-Brazil model. This June, however, Foxconn moved to shutter operations, reportedly employing fewer than 10,000 workers there.

The Washington Post found other countries jilted by Foxconn. In the last decade it has committed to a $1 billion investment in Indonesia, $5 billion in India, and $5 billion in Vietnam. All the projects have been abandoned or are years behind schedule and at a fraction of the promises.

In 2013 Foxconn announced it would build a $30 million factory in Pennsylvania with 500 new jobs. Four years later the proposed site is a pile of gravel topped by a “Trump-Pence” campaign sign behind a chain-link fence.

In Brazil, Foxconn was unable to recreate the supply chains that revolve around its city-sized factories in Shenzhen and Guangzhou. Those two Chinese cities produce the vast majority of the world’s consumer electronics because of dense networks of workers, suppliers and manufacturers that enable brutal cost cutting, speed, flexibility, and innovation.

Some Foxconn factory workers in Brazil made around $350 a month. Its workers in China earn $320 to $500 a month. In Brazil the work was low skill, clicking together already manufactured components to give the appearance Apple products were being made in country. Despite the low pay, iPhones and iPads assembled in Brazil were some of the most expensive in the world.

Gou blamed the manufacturing problems in Brazil on high wages, soccer, and “all the dancing.”

Wisconsin lacks the supply chains. Its workforce has a skills gap. The State of Wisconsin claims workers at a future Foxconn plant will average $4,500 a month, at least nine times wages in China and Brazil.

All signs point to the deal being a bust before the first spade of dirt is overturned.

Even if a Wisconsin plant is ever realized, anyone eager to work there may rue what they wished for. Foxconn’s China operations are known as hell factories where poisoning from toxic chemicals is commonplace and 11 workers jumped to their deaths in less than a year from its Shenzhen plants.

That’s of no concern to the unsavory characters involved. Softbank is eager to find a takeover target to merge with Sprint. Trump, Walker, and Ryan are angling to get a boost in Wisconsin. The Saudis and UAE score points with Trump. Foxconn loses nothing from breaking promises, while deepening ties to Softbank and its massive venture fund. Given that Trump’s consigliere, Jared Kushner, oversaw the deal with Foxconn, some underhanded deal may have been struck among the parties.