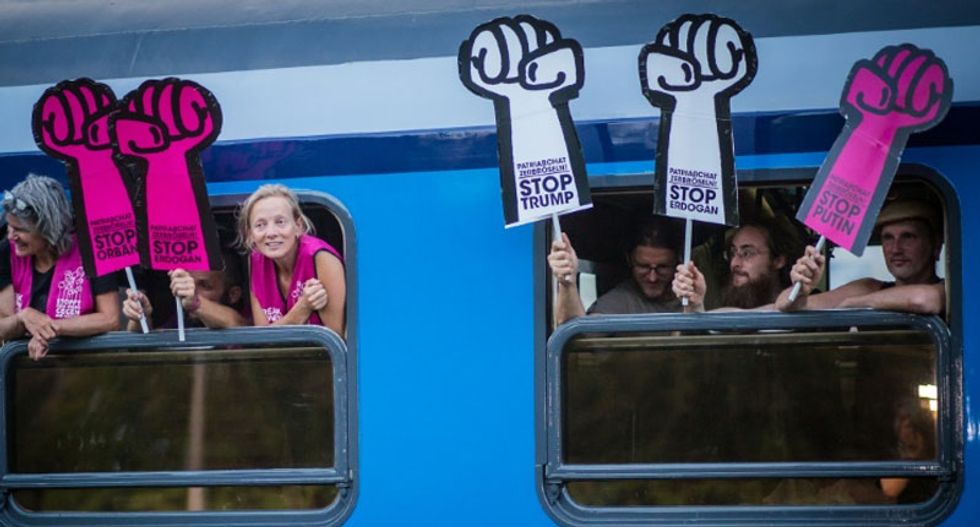 A special G20 train pulls in to Kornwestheim station in southern Germany to pick up passengers en route to the protests in Hamburg. (dpa/AFP / Christoph Schmidt)

Germany's G20 summit host city Hamburg braced for a potentially violent "Welcome to Hell" protest Thursday by anti-capitalist activists as tensions rise in the lead-up to the power meeting.

Up to 100,000 demonstrators are expected before and during the two-day Group of 20 meeting that starts Friday and will bring US President Donald Trump, Russia's Vladimir Putin, China's Xi Jinping and other leaders to the city.

A holding centre for detainees has been set up with space for 400 people and detention judges are on hand.

Some 30 demonstrations have been announced before and during the meeting, organised by anti-globalisation activists and environmentalists, trade unions, students and church groups.

Late Thursday, police detained six people for throwing bottles at officers as about 11,000 protesters marched through Hamburg to techno music under the banner "I'd rather dance than G20".

Police were also investigating a fire at a local Porsche dealership in which eight luxury vehicles went up in flames.

Most protests are expected to be peaceful but several will be spearheaded by radical leftwing and anarchist militants known as "black bloc" activists who have often clashed with police, hurling rocks, bottles or fireworks.

"Welcome to Hell" organiser Andreas Blechschmidt said the motto is "a combative message ... but it's also meant to symbolise that G20 policies worldwide are responsible for hellish conditions like hunger, war and the climate disaster".

Blechschmidt told AFP that activists would seek to blockade access to the summit venue and, as usual, "reserve for themselves the option of militant resistance" against police.

German Chancellor Angela Merkel said that while peaceful demonstrations must be respected, "those who use violence mock democracy".

Hamburg has banned rallies from the inner city and along access roads to the airport, forcing marchers into harbourside areas of St Pauli and Altona, away from the G20.

Protesters accuse the authorities of turning Germany's second city into a "police fortress" and restricting their constitutional right to assemble and demonstrate.

The city says it won't be taking any chances as it must protect leaders, some 10,000 delegates and almost 5,000 media workers from both the threat of terrorist attacks and the street protests.

Tourists Claudia Keller, 60, and her partner Werner Hofes, 57, tried to enjoy the downtown Alster lake view from a park bench Thursday as police sirens filled the air, the nearby railway tracks were sealed off with razor wire and helicopters buzzed overhead.

"Had we known this when we booked, we wouldn't have come -- we can't really go anywhere," said Keller, a medical lab assistant from a town near Essen, visiting Hamburg since Monday and happy to be leaving Friday.

"Yesterday we went to a theatre, and outside stood all these police and water cannon vehicles. It really darkened the atmosphere."

Hamburg resident Mario Walke, 65, had a more positive take, saying "it's right that the powerful of this world get together and discuss the big topics, like terrorism, poverty and misery".

The retired educator added that he understands "if people want to demonstrate, but not if they want to riot".

Mega-summits like the G20 have in recent years usually been held in remote locations, but Germany was forced by its logistical demands to host it in a large city with a big venue and dozens of hotels.

Hamburg is desperate to avoid a rerun of the kind of major urban clashes seen at the 2001 G8 summit in Genoa or the Frankfurt opening of the new European Central Bank building in 2015.

"The city will require a degree of protective measures, which may get more media attention than the meeting's contents. Such a result would reinforce an increasingly negative impression of the summit."