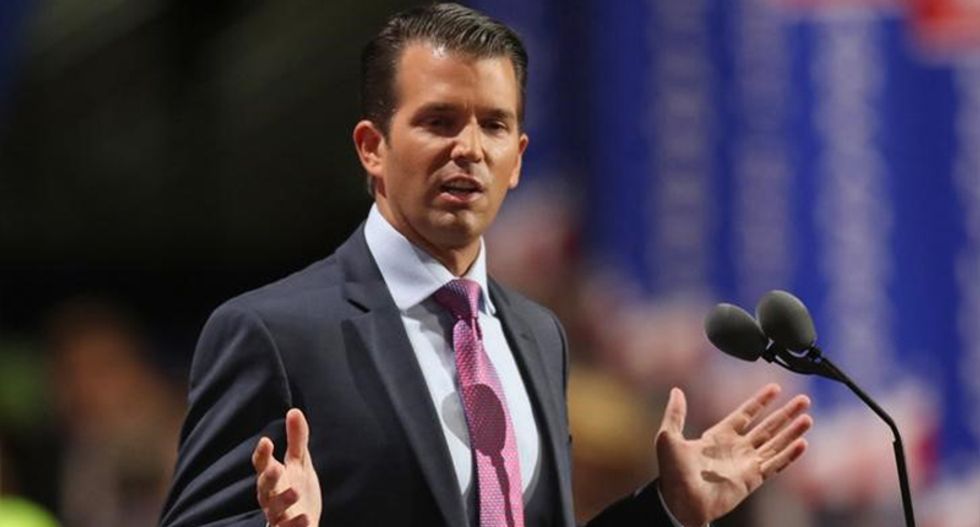 Donald Trump Jr. released the full email conversation setting up a meeting with a Russian attorney just minutes ahead of the New York Times publishing their contents.

The Times has reported an escalating series of stories since Saturday on the meeting -- which was set up and attended by the president's son, along with son-in-law Jared Kushner and then-campaign chairman Paul Manafort.

Those reports culminated Tuesday morning with Trump Jr.'s emails, which the president's son also posted in full on his Twitter account -- along with a statement explaining the emails were shared in an effort to be "totally transparent."

The biggest bombshell came in the initial contact, when former British tabloid reporter and entertainment publicist Rob Goldstone reached out to Trump Jr. to set up the meeting.

Goldstone, who met President Donald Trump during his Miss Universe pageant in Moscow, offered to connect Trump Jr. to a senior Russian government official who offered to provide the Trump campaign with damaging information against Hillary Clinton.

"(These) official documents and information would incriminate Hillary and her dealings with Russia and would be very useful to your father,” Goldstone wrote. “This is obviously very high level and sensitive information but is part of Russia and its government’s support for Mr. Trump.”

Trump and his associates have denied intelligence assessments that Russia and its president, Vladimir Putin, interfered in the U.S. election to assist the Republican presidential candidate.

The president's son -- who was aware from the initial contact that the Russian government was offering potentially valuable information to aid his father's campaign -- replied within minutes and offered to speak about the matter with Emin Agalarov, a mutual business associate.

“If it’s what you say I love it especially later in the summer,” Trump Jr. replied to Goldstone's first email.

Goldstone also offered to send this "ultra sensitive" information to the candidate himself, through his longtime assistant Rhona Graff.

Trump Jr. and Goldstone set up a meeting with Natalia Veselnitskaya, who was described in the emails as a "Russian government attorney who is flying over from Moscow," and a second person who was not identified in the emails or named in news reports.

The president's son notified Goldstone that Manafort and Kushner -- who were added to the email chain titled "Russia - Clinton - private and confidential" -- would also attend the June 9, 2016, meeting at Trump Tower, which the emails show took place at 4 p.m.

The elder Trump was at Trump Tower that day, meeting with then-RNC chair Reince Priebus, Manafort and others -- and he made his first-ever mention of Clinton's missing emails in a tweet posted that afternoon at 4:40 p.m.