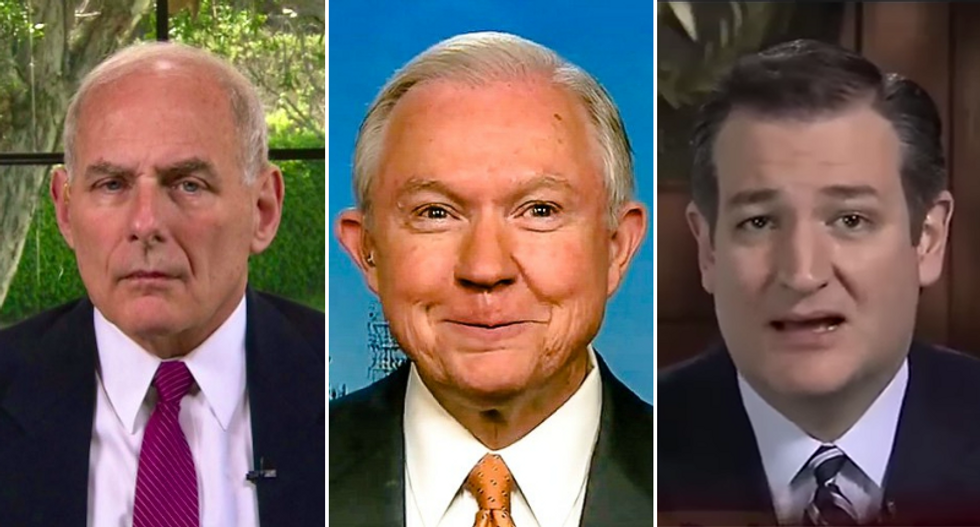 President Donald Trump appointment John Kelly as White House chief of staff will create a leadership vacancy at the Department of Homeland Security.

"Secretary Kelly remains the Secretary of Homeland Security until Monday, July 31," the department clarified in a statement. "At which time Deputy Secretary Elaine Duke will become acting Secretary."

Thus, the humiliating ouster of Reince Pribus will eventually turn into a confirmation battle over the next Secretary of Homeland Security -- the $40 billion department with nearly a quarter million employees.

As Donald Trump is fixated on the dark cloud of Robert Mueller's investigation, could Trump use his power of appointment to end the investigation?

Here's how it would work.

Trump blames Attorney General Jeff Sessions for recusing himself from the Russia investigation. But Trump can't fire Sessions, because Republicans would be up in arms.

But Trump could nominate Sessions to be the Secretary of Homeland Security and then use the "The Vacancies Reform Act of 1998" to laterally move in a new Attorney General – absent consent from the senate on fitness for the position. Washington Post reporter Philip Bump had Georgetown Law professor Paul Butler explain this scenario.

"So, in other words, if Sessions were to resign, President Trump could appoint, say, Rick Perry, the Secretary of Energy, to be the acting Attorney General?" Bump asked.

Since Trump announced who would be replacing Priebus but not who would replace Kelly, there is rampant speculation that this is the first step in an effort to quash the Russia investigation.

"I know it's a crazy thought, but what if Trump tries to put Sessions at DHS as a way of getting a new Attorney General to fire Mueller?" Tufts professor Dan Drezer wondered.

"I predict they're going to try to move Sessions over to DHS...immigration is their most impt issue."-@DanaPerino #TheFive #perinoprediction
— The Five (@The Five)1501290777.0

Just getting Sessions to leave Justice for Homeland Security would also allow Trump to pick an AG who could be confirmed.

For instance, Senator Ted Cruz (R-TX) might be able to be confirmed just to get him out of the building.

This is a developing story.