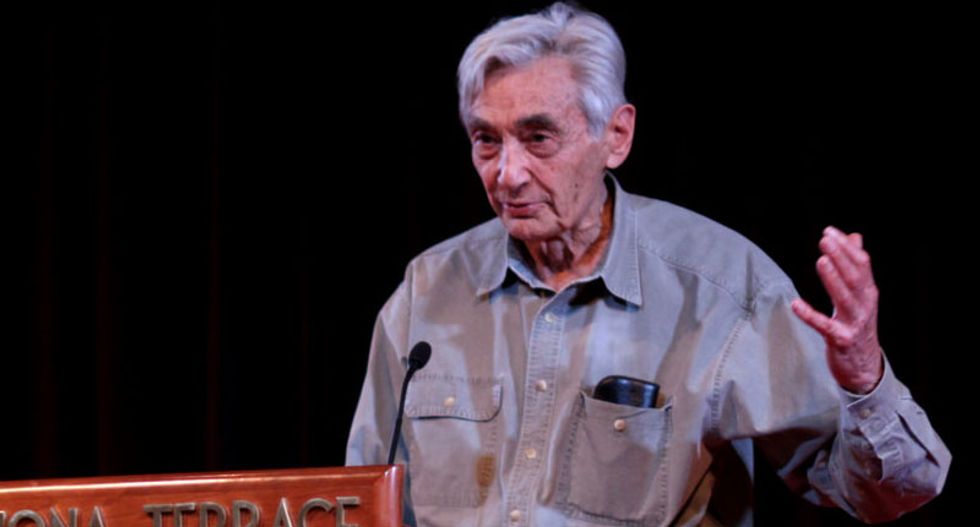 Historian and activist Howard Zinn died in 2010, and the progressive world greatly misses his spirit and guidance. One wonders what he’d have to say about America today — one in which senators create legislation in secret and a president denigrates foes and allies alike via Twitter. What would he, a former Cub Scout, think about the president’s recent speech in which he exhorted Boy Scouts to boo a previous president? We can be pretty sure that he’d be dismayed and disgusted by an America where CEOs make 271 times the pay of an average worker and where the top 0.1 percent hold 11 percent of the national income. He’d certainly be no fan of a culture that made serious, though unsuccessful, attempts to ban his signature work, A People’s History of the United States.

But Zinn might also be heartened by the explosion of activism that the Trump administration, especially the outcry over health care, has spawned in American society. Back in 1970, Zinn was invited to debate philosopher and former US assistant secretary of state, Charles Frankel, about the legitimacy of civil disobedience. Zinn argued that there is a fundamental difference between respect for the law as set down by the Bill of Rights and the law as made in everyday practice. Combatting injustice wasn’t a matter of anarchy or treason — but one of respect. Zinn did more than hold his own.

His words from nearly 50 years ago are a powerful reminder of who holds the reigns of power in this country and how the populace must come together to get it back. Here are some excerpts from his speech.

Zinn on Respect for the Rule of Law

And the answer to that question is much easier to come by, because we have a lot of empirical evidence about what happens if everyone obeys the law, or if even most people obey the law. What happens is what has happened, what is happening. Why do people revere the law? And we all do; even I have to fight it, for it was put into my bones at an early age when I was a Cub Scout. One reason we revere the law is its ambivalence. In the modern world we deal with phrases and words that have multiple meanings, like “national security.” Oh, yes, we must do this for national security! Well, what does that mean? Whose national security? Where? When? Why? We don’t bother to answer those questions, or even to ask them.

But there is another part of the law that doesn’t get ballyhooed — the legislation that has gone through month after month, year after year, from the beginning of the Republic, which allocates the resources of the country in such a way as to leave some people very rich and other people very poor, and still others scrambling like mad for what little is left. That is the law. If you go to law school you will see this. You can quantify it by counting the big, heavy law books that people carry around with them and see how many law books you count that say “Constitutional Rights” on them and how many that say “Property,” “Contracts,” “Torts,” “Corporation Law.” That is what the law is mostly about.

Zinn on the Society of Law

There are other problems with the law. It’s a strange thing; we think that law brings order. Law doesn’t. How do we know that law does not bring order? Look around us. We live under the rules of law. Notice how much order we have? People say we have to worry about civil disobedience because it will lead to anarchy. Take a look at the present world in which the rule of law obtains. This is the closest to what is called anarchy in the popular mind — confusion, chaos, international banditry. The only order that is really worth anything does not come through the enforcement of law, it comes through the establishment of a society which is just and in which harmonious relationships are established and in which you need a minimum of regulation to create decent sets of arrangements among people. But the order based on law and on the force of law is the order of the totalitarian state, and it inevitably leads either to total injustice or to rebellion — eventually, in other words, to very great disorder.