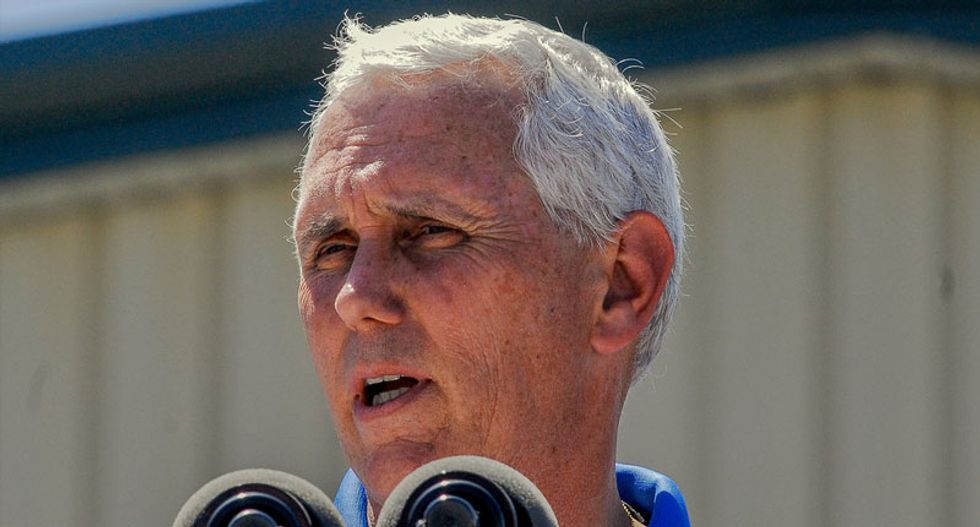 US Vice President Mike Pence on Sunday visits Estonia to reassure the three Baltic NATO members, concerned over neighbouring Russia's military activity, before continuing on to Georgia and Montenegro with the same mission.

Pence will meet with Estonian Prime Minister Juri Ratas on Sunday regarding the possibility of installing American anti-aircraft defence systems in the small country of 1.3 million people.

Relations between Moscow and Tallinn have been fraught since Estonia broke free from the crumbling Soviet Union in 1991, joining both the EU and NATO in 2004.

More recently Estonia and fellow Baltic states Latvia and Lithuania have been spooked by Russia's frequent military exercises near the region and its 2014 annexation of Crimea from Ukraine.

On Monday, Pence will meet Estonian President Kersti Kaljulaid and her Lithuanian and Latvian counterparts, Dalia Grybauskaite and Rajmonds Vejonis.

He will then visit troops from the Enhanced Forward Presence programme, under which NATO has deployed four battalions to the Baltic states and Poland to bolster the western defence alliance's eastern flank.

Local analysts expect Pence to offer Estonians what they want to hear, including that "the US is a good loyal ally and that they appreciate Baltic sacrifices including their 2 percent of GDP spending on defence and their participation in military operations in Afghanistan," according to Tallinn University international relations specialist Matthew Crandall, as quoted by public television ERR.

Analyst Andres Kasekamp added on the same channel that "the timing, before Russia's Zapad exercises (in September in Belarus, near the Lithuanian border) shows that the US wants to say: 'We are watching what's happening here very closely and you can be certain of our support.'"

The Zapad exercises have triggered concern in Lithuania, since they will take place relatively close to the Suwalki gap, a land corridor crossing southeastern Poland which is critical to the security of the Baltic states.

The 80-kilometer (50-mile) stretch of border with Lithuania is sandwiched between the Russian enclave of Kaliningrad to the west and Moscow-friendly Belarus to the east.

This corridor of land is considered the potential Achilles heel of NATO's eastern flank, because a hypothetical Russian offensive there could easily isolate the three Baltic countries to the north.

Lithuanian authorities have said that up to 100,000 Russian and Belarussian troops could take part in the exercises. But Belarus Defence Minister Andrei Ravkov told the Russian TASS news agency that the soldiers will only number around 13,000.

Pence is expected to make similar assurances in Tbilissi during talks with Georgian President Giorgi Margvelashvili on Monday night and with Prime Minister Giorgi Kvirikashvili on Tuesday.

US backing of Georgia's sovereignty and territorial integrity will also be well-received in the country, especially since it is not a NATO member and memories of the 2008 Russo-Georgian war remain vivid.

To that end Pence will on Tuesday meet with US and Georgian troops who are taking part in the Noble Partner 2017 exercises.

He will then continue on to Podgorica to meet with Montenegro's leaders on Tuesday night. The tiny former Yugoslav republic has a population of 660,000 and lies on the Adriatic sea.

Montenegro joined NATO in June in the face of bitter opposition from Moscow, which says NATO's steady expansion into the former communist states of eastern Europe threatens its own security and cannot go unchallenged.

On Wednesday, Pence will attend the Adriatic Charter summit, which in addition to the US and Montenegro will bring together four other countries in the region (Albania, Bosnia, Croatia and Macedonia).

Kosovo, Serbia and Slovenia have observer status and should also be represented at the meeting of the alliance, which was created in 2003 in order to facilitate the region's integration into NATO. So far Albania, Croatia, Montenegro and Slovenia have joined.