'They feel left out': Trump's sons reportedly growing jealous of Kushner's role in the White House 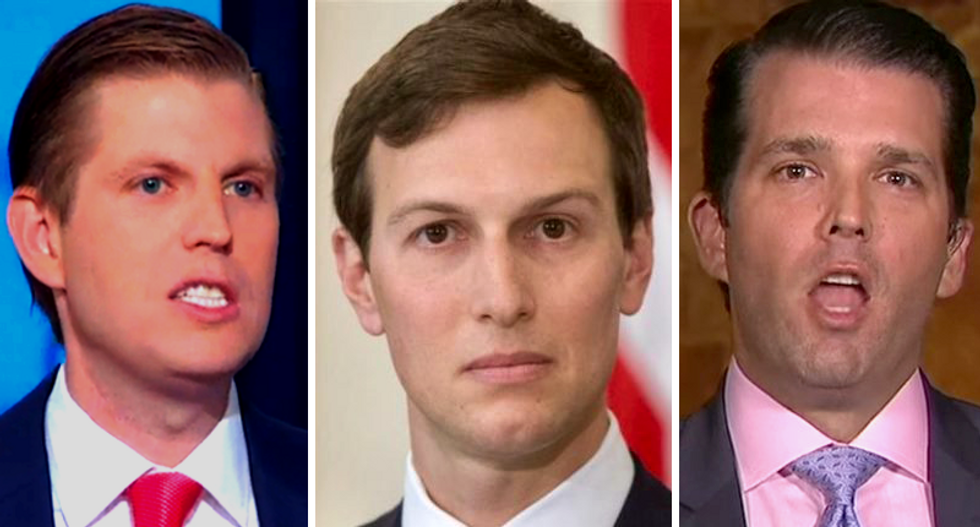 Following Trump’s win last year, it became apparent that Kushner, one of the president’s most trusted advisers on the campaign trail, would be coming with him to the White House. And according to People, the focus on their brother-in-law frustrates the Trump brothers.

“All the attention to Jared is a bit of a sore point and they feel left out of the fun in D.C.,” a friend of the family’s told People. “They miss being at the center of the action.”

“During the campaign, the brothers thrived on being the spokespeople and speaking at rallies and being very visible,” the friend added. “Jared was able to build much more influence and power by doing exactly the opposite.

The news comes one day after People reported Eric and Don Jr. are “miserable” and can’t wait for their father’s stint in the White House to end.

“[President Trump] doesn’t like failure and mistakes, and he doesn’t accept them,” a source told People. “You have to justify your existence to be in his realm.”

"Perhaps this story was put out and hung on Donald Trump’s son to move it away from Donald Trump’s son-in-law, who definitely has more legal exposure, who is right in the heart of the White House, who’s in the middle of all these policy matters, who played a role in firing FBI Director [James] Comey, who supposedly is one of the people who advised the president to fire Director Comey, who has been threatening your colleagues here at MSNBC with bad stories and all these things,” Klain said.